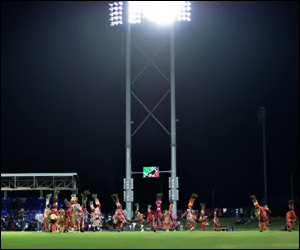 History was made in St. Kitts and Nevis on Thursday night as hundreds of nationals witnessed the commissioning of a new lighting and visual media system that transformed the Warner Park Cricket Stadium as a top draw for international cricket.

The commissioning signaled the completion of a US$4 million project which saw the installation of four twin pole lighting structures around the ground that provides 3,700 lux of lights, a 44×22 jumbotron with four additional 8×6 screens, the installation of 800 watt generator and 1,000 kilowatt transformer.

“The Warner Park Lighting Project is both a manifestation of years of progressive planning by the Ministry of Sports and the Government of St. Kitts and Nevis and preparation for years of strategic advancement in the area of sport development and the added benefits of sports tourism,” Minister of Sports the Honourable Glenn Phillip stated.

The impressive ceremony featured entertainment by the National Youth Drum Corp as well as the Okolo Tegremantine Arts Theatre. It was attended by Governor General His Excellency Sir Edmund Lawrence, members of the Federal Parliament, diplomatic corps representatives, and members of the local and regional cricket fraternity.

Minister Phillip paid tribute to his predecessors, Her Excellency Jacinth Henry-Martin and the Honourable Richard Skerritt for the vision to upgrade the park to host international cricket, football and netball matches.  He explained that the new lighting and visual media systems place Warner Park at a significant advantage when it comes to hosting international games or concerts.

“The best in their fields have been brought together to create an ambience that can only be felt at Warner Park, St. Kitts,” the Minister of Sports stated, adding that this is not the end. “Rather it is the beginning of a new and exciting era in sport, sports tourism and the socio-economic destiny in our country.”

Deputy Prime Minister and Minister of Works the Honourable Dr. Earl Asim Martin praised Minister Phillip for his vision in changing the landscape in the Federation’s sporting infrastructure.

“It will produce new and important revenue streams to the vast array of businesses, service providers, hotels, taxi drivers, restaurants and others including the government who benefits directly and indirectly from sports tourism,” the Deputy Prime Minister stressed.

Honourable Martin said that Warner Park’s cricket stadium will have a lighting system that is “second to none.”

“This is very much in keeping with the government’s belief that the people of St. Kitts and Nevis deserve the very best in all areas of life and your government will continue to work in that area,” he stated, to thunderous applause from the audience. “Most importantly ladies and gentlemen, this facility will continue to be accessible to our nation’s youth as part of our country’s after school programmes and this is a major positive step forward.”

The Warner Park Lighting and Visual Media Systems project was executed by Prabha International of Canada with assistance from Qualite Sports Lighting. However, most of the work was subcontracted to local businesses and individuals. Funding from the project was provided by the local Sugar Industry Diversification Fund (SIDF).

The celebratory atmosphere was evident at the end of the commissioning ceremony when Nick Page, Vice President of Technology at Qualite Sports Lighting, handed over the close out documents and 10-year warranty information to Deputy Prime Minister Martin.

Fireworks erupted into the sky as the lights switched on in four different stage levels. Performances from folklore groups including the Masquerades, Clowns, Mocko Jumbies and the Bull ensued. Soca Monarch Champion Mr. Hype closed out the entertainment performing his hit tune “Wuk It.”