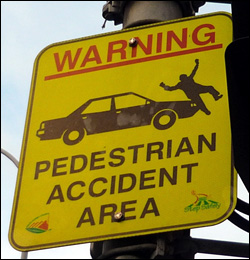 This is the Federation’s third road fatality for 2012.

The Traffic Department is investigating a road accident which occurred about 8:30 pm on July 28th 2012 along the Island’s Main Road at Cayon involving motor car PA 5457 driven by Vance Archibald of Upper Cayon, motor jeep PA 6031 driven by Warren Bradshaw Jr. and a pedestrian June Nolan of Sandy Point.

Investigations revealed that PA 5457 was traveling from Molyneaux to Cayon when it collided with the pedestrian.  Shortly after, PA 6031 which was traveling in the same direction ran over the pedestrian. She was pronounced dead at the scene by the District Medical Officer Dr. Garfield Alexander.

Both drivers were taken into custody. Vance Archibald was subsequently arrested and formally charged for driving without insurance and driving an unlicensed vehicle.

An autopsy will be performed to determine cause of death. Investigations are ongoing.

This is the Federation’s third road fatality for this year.