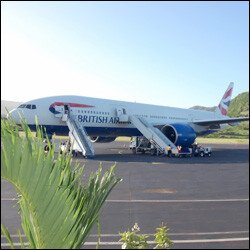 Rosecita Jeffers, CEO, St. Kitts Tourism Authority recently concluded an official seven day visit to the UK, during which she met with key members of the industry as well as media to further strengthen St. Kitts partnerships in the market.

At a high-level review meeting with British Airways and BA Holidays, the performance of the twice-weekly route and its impact on visitor arrivals and growth in the UK market, was a key focus of discussion.  Representing the airline at the meeting were several key personnel including Alison Nicholls of Business Development; Masha Krasilnikova of Marketing and Claire Buckland of BA Holidays.

Commenting on the meeting, Rosecita Jeffers said, “We were pleased to hear from BA that the route continues to perform well with projected autumn and winter sales looking positive;  this on-going success two years on from that first flight in to St. Kitts, encourages us to maintain an optimistic outlook in what is still an uncertain period in the industry.”

The positive impact of the BA route on visitor arrivals from the UK and the island’s current position in the market also remained important discussion points for the CEO at tour operator meetings with Exsus, and with Cox & Kings, who has recently announced new programmes in to St. Kitts.  Later, in Manchester, during an informal lunch event, strengthening UK partnerships in the North West and stimulating growth in sales remained key discussion points with trade partners including Travel Counsellors, Gold Medal/Thomas Cook, Worldwide Travel Solutions and Azure.

Media were also kept abreast with news about St. Kitts with meetings focusing on the appeal of St. Kitts as a destination, how it differentiates from other Caribbean islands as well as the upcoming 15th Anniversary of the St. Kitts Music Festival.  Media heard about island’s key attractions, its natural and unspoilt beauty, genuine hospitality and the authentic and traditional holiday experience that visitors would find in St. Kitts.

The highlight and final leg of the official UK visit was the Telegraph St. Kitts rum-tasting event, which afforded the CEO the opportunity to meet directly with consumers, readers of the Telegraph, who were interested in St. Kitts. Following a welcome speech given to the audience at the event, Rosecita remarked, “The record numbers who applied for tickets to attend can only be attributed to the appeal that St. Kitts now has in the UK market and underlines the strength of partnerships without which this project would not have been possible.”