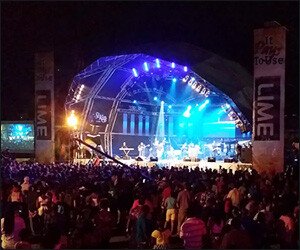 This year’s St. Kitts Music Festival is being dubbed the biggest to date. Although it took place last June, the three-day event is still attracting international reviews.

The opening ‘Jump Up’ night featured Trinidadian star Machel Montana in a showcase of soca and calypso music, followed by Destra, the Barbadian Queen of Bachanal.

Machel Montano’s high-energy 75-minute set saw him play his hits “Indian Gyal”, “Happiest Man Alive”, “Possessed” and “Pump Yuh Flag”, having taken the stage after the much-loved Small Axe Band, and duo, Deli Ranks and Meeko, who got the crowd pumped up to fever pitch.

Legendary Calypsonian, Explainer – known for hits “Lorraine”, “Not Me” and “The Monarchy” – and Skinny Fabulous, an unmistakably energetic soca artist from St. Vincent and the Grenadines, closed the festival’s debut night on a high, just in time for its 3 a.m. curfew.

Celebrating his birthday, McGregor took to the mic to deliver a special extended performance, delighting the crowd (and no-doubt the organizers) by singing the praises of the festival’s set-up, saying: “Your country is on the rise… and the festival is excellent, production-wise.”

Headliner Beenie Man told fans this was his 9th visit to St. Kitts.

The ‘King of Dancehall’ Beenie Man was the highlight of the whole event for me. The Grammy award-winning Jamaican reggae artist played his chart-topping hit “Who Am I” as he strutted around the stage in a sharp, DayGlo yellow suit, working the crowd for over an hour. Pure class!

On the third and final night, Kelly Rowland got feet moving to some of her former group’s Destiny’s Child singles as well as a showcase of her own chart-topping solo tracks. She performed hot on the heels of Jamaican-born Tessanne Chin, who recently made history as the first West Indian to win NBC’s The Voice.

Chin – a freshly-signed Universal Music artist – started her set with an extended rendition of the hit song that brought her into the limelight in the first place, “Try”, before breaking into a heartfelt tribute to her fellow Jamaican, Bob Marley, wooing the crowd with a soulful rendition of the reggae legend’s iconic “Redemption Song”.

The festival’s penultimate performance was given by another of the lineup’s international shining lights, the Grammy-nominated R&B singer-songwriter and Fast and the Furious actor, Tyrese Gibson.

The multi-talented Gibson, who won an American Music Award in 2000 for Favorite New R&B/Soul Artist and a Grammy nomination for Best R&B Male Vocal Performance, delivered one last blast of star quality to a festival that international music lovers have come to look to as a showcase for the best in Caribbean entertainment.

While the St. Kitts Music Festival provides visitors with more than enough opportunity to party, eight hours a night for half a week, you’ll need some serious sustenance before you’re ready to head over there. Eating out in St. Kitts means embracing your sense of adventure to seek out the very best local eateries around the island. Basseterre is host to a wealth of history, to explore.

Dinner on my first night there was in Limekiln Bay at the open air Fisherman’s Wharf restaurant, where expertly-prepared lobster was served in front of a lively local band. Both the musicians and the staff were keen to get us into the mood for the bigger party to come, by keeping the Carib beer flowing for both diners and dancers enjoying the Caribbean sounds on its Al Fresco balcony.

El Fredo’s lunch-only restaurant in Newtown was also a find, offering some respite from the scorching midday sun. This eatery is fenced off from the road with distinctive mosquito-net walls, and offers an authentic meal alongside the locals. Its proximity to the harbor means they get first refusal on the fisherman’s daily haul of Wahoo, tuna and, my personal favorite, the delicious white-meat Mahi-Mahi.

Nearby Port Zante is a well-scrubbed and brightly-painted village of bars and shops selling clothes, postcards and even diamond rings to the 700,000 passengers who disembark there annually, hoping to experience a slice of the island, before heading back onto their city-sized cruise ships.

Wanting to get away from all that and back to the island’s roots, literally, I took a ‘jungle tour’ of the center of the island.

This started from the old Sugar Plantation at the Wingfield Estate, where a two-hour hike saw us traverse a couple of kilometers of beautifully lush rainforest, through rows of spiky Sandbox trees while a soundtrack of screeching monkeys and singing Elaenias birds echoed around canopy, high above.

In the evenings, before and after the festival, there was all manner of nightlife and partying going on down at the island’s “Strip”. Music lovers needing a break can opt for a guided jungle tour.

This stretch of South Frigate Bay beach offers a few dozen bars – ranging from smart English-pub-like offerings with wood paneled walls and beer on tap – to flashy nightclub watering holes showing American sports. Of course, the authentic end of this is the traditional wooden shack offering, where you can watch local musicians perform while trying some moonshine rum.

In any one of the different bars, you’ll find a mixture of Kittitians, visitors and international students from the vet university partying on the dance floors together, or around the beach fires on the powder white-sands outside.

Despite St. Kitts’ multitude of offerings, I fancied a change of scenery towards the end of my stay, so decided to head to Nevis – St Christopher’s sister island – a 45-minute ferry ride away.

As you approach this mythical-looking island on your voyage across the Narrows, its forest-covered peak topped with swirling white clouds against a deep blue sky, you really believe you’re heading to an unspoiled paradise.

When you alight, it reveals itself as having a distinctly different, laid-back feel from the mainland, offering quirky places to stay at and eat.

I’d been told to check out the The Hermitage in Gingerland, which sits on the shoulder of the volcanic mountain that looms over this tiny landmass. A family-run former sugar plantation house, it sports possibly the oldest standing timber frame building in the Caribbean as its lounge room.

Nevis offers a more relaxed way of life from the mainland.

Individual painted wooden huts provided unique guest houses here, scattered around the estate’s manicured tropical gardens, adding to the fairy-tale feel of the tiny island utopia I had discovered and quickly fell in love with.

They may be two different islands, but they together make one distinct country, which is being descended upon by ever-growing numbers of music fans and tourists alike, each year.

I knew before I left that I’d be back the following year, to check out the festival once more and the wider offerings this colorful and complex country offers.

It started life as the Shak Shak Festival in 1996, but now stands strong among Music Festivals across the region, attracting both locals and international visitors alike.