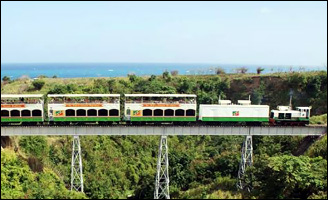 St. Kitts’ Scenic Railway train has been listed among 30 stunning heritage trains of the world and the only one in the Caribbean.

Rediff business of Rediff.com, which presents a slide show of the 30 railways from the pages of history said Wikipedia recently came up with the list of Heritage Railways across the world.

It notes that a heritage railway tells a lot about a particular nation and its history and that adds to a country’s glamour quotient and draws tourists from across the world.

“The ‘Island Series’ railcars of the St. Kitts Scenic Railway are double-decked, with an upper open-air observation platform. Riding the rail cars, one can view the sugar cane and island vegetation for unobstructed 360 degree viewing, and a lower air-conditioned parlour. Each passenger has a seat on both the top observation deck and in the air conditioned lower level ‘parlour’ of each railcar. There is a service bar, a restroom, and paintings by local artists hang on the walls,” it said showing a photo of the train on one of its runs.

Last year, St. Kitts was named a top destination for 2011 by both AOL Travel and British Airways.   Located in the northern Leeward Islands of the Caribbean, it offers a diverse tourism product developed from the destination’s natural beauty, cultural heritage and rich history.