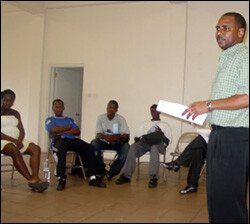 The youth voice in St. Kitts and Nevis has been noted and will be used to help shape the new youth development thrust of the Organisation of Eastern Caribbean States (OECS) Secretariat.

The Youth Sector Audit is being implemented through the Secretariat’s Social Policy Unit after a strong push by Dominica’s Prime Minister Roosevelt Skerrit to have a more focused approach to youth development in the region. Activities toward the audit began in 2008.

Henry Mangal of St. Lucia recently visited St. Kitts as part of a consulting team gathering the thoughts of young people in the region. He dialogued with local youth during a focus group at the Newtown Community Center on Thursday. Topics discussed include: Critical issues facing youth and how they are being addressed.

“We also wanted to get some suggestions and recommendations from them as to how the response to some of the youth issues in their country can be improved,” Mr. Mangal told SKNIS.

He described the session with the local youth as productive and noted that he was pleased with the level of interaction. The visiting consultant commended the Department of Youth for coordinating the activity, ensuring that a wide cross-section of the youth population was represented.

“The Director of Youth Geoffrey Hanley was very [instrumental in this process],” Mr. Mangal stated. “He played a sterling role in bringing the group together so that we could have a wide-ranging discussion, which [produced] a number of ideas as far as the vision and the views of young people are concerned.”

Dr. Tennyson Joseph, a lecturer at the University of the West Indies Cave Hill Campus, is the other lead consultant of the OECS Youth Sector Audit.

Mr. Mangal revealed that the group is on track to complete its work and present findings at the end of June 2009. He explained: “the OECS has been very successful when it has come together to address particular issues and we expect that it will be no different when it comes to youth development.”

The OECS Youth Sector Audit Consultant indicated that officials were mindful of similar programmes already taking place in some member states and stressed that collaboration with those implementing agencies is key to ensure resources and efforts are not wasted via duplication.