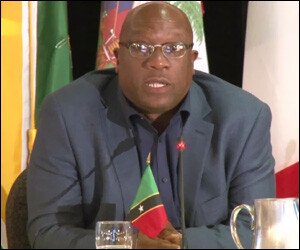 Young people were advised by Prime Minister of St. Kitts and Nevis Dr. the Honourable Timothy Harris to merge creativity with work, at the Closing Ceremony of the Governors’ Meeting of the Caribbean Development Bank (CDB).

He encouraged young people to seek their own employment niche.

“We want you to be good thinkers, and to be thinking not so much about somebody providing you with a job but how you are going to create a job for yourselves,” Prime Minister Harris emphasized. “That is part of the new mindset, because we have seen that the governments are now maxed out, they can’t do more; that the private sector traditional in its orientation, is not creating the kinds of jobs that we want; that the banking system as we know it is not responding to your needs.

“You want to dance, you want to sing, you want to be in a movie, these are high-risk for the traditional banks. Yet you earn the right to be the best of what you want to be. And in these new areas, if you were to apply your creativity and add to industry, you are going to help us create new areas, new industries from which the new growth will come.”

The Prime Minister noted that these new industries will be the injection that will lead to the further stimulation of Caribbean economies.

“From all that we have learnt and “¦ it is true to say, that what we have now, will only take us so far and no more,” he said. “What we have now over the last 30 years has not excited the kind of growth that delivers the jobs to you. We would be somewhat delusional to expect that we can have the kind of transformation in the medium-term, in some of these traditional industries that is going to supply what we now need ““ not just growth. The empirical evidence is that growth has come but it has not been the job-rich growth which we needed. Growth has come but it has not led to the transformation of the economies which we want.”

During his remarks Prime Minister Harris noted that the Governors’ Meeting had addressed several pertinent issues such as intra-regional travel, poverty alleviation in the context of “the working poor” and the link between the education system and jobs.

“We have to do things differently and look for different areas of engagement,” he stressed. “That is in part what our education system and our families, our homes, our churches must help our young people to appreciate ““ so that their attitude to work, their attitude to economic life, their attitude to society, can be fashioned in a constructive way.

The Closing Ceremony also included remarks by CDB President Dr. Warren Smith, the presentation of awards to the winners of the Vybzing Forum and Vybzing Spoken Word Challenge as well as the announcement of the CDB annual donation of computers to deserving entities in the host country.