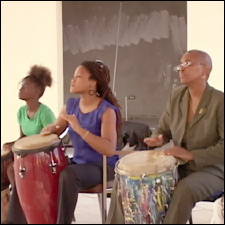 Twelve women representing a wide spectrum of age, race and professions, were all united by the rhythm of the drum when they heeded the call to take part in a recent drumming workshop.

Coordinated and facilitated by Drumming Specialist Royd Phipps of the Department of Culture, the Female Drumming Workshop provided girls and women the opportunity to infiltrate a music discipline that is predominantly male.  Mr. Phipps enthused that he had the joy of conducting the week-long workshop.  He described the participants as “great.”

“They are really, really, super students,” Mr. Phipps emphasized. “I really enjoy it and I look forward to seeing them everyday.  I’m going to miss them.  But they are drummers for life.”

The participants were quite stirred by the creative sessions, one noting that she had desired such for a while and had personally encouraged the Drumming Specialist to undertake such an activity.  Another expressed that it was brining out an inner Naiabingi personality.  The fact that the training was free was sited as another advantage.

There were also several participants who were drawn to the workshop because of their interest in other creative arts specifically dance, one noting that she was a former Okolo Tegremantine Dance Theatre dancer. Several were also drawn by the sound of the drum.

The younger participants reveled in the joy of drumming while others were able to temporarily pound away the anxieties of life, describing it as a definite stress reducer.

Personal experiences motivated others memories of a late husband who was a drummer.  The workshop also provided a comfortable atmosphere for one drummer who said that she did not feel intimidated during sessions.

Mr. Phipps noted that the female drummers will be a welcomed addition to “Heartbeat” which is the Department of Culture’s annual drumming programme which showcases the art-form along with other music talent of the Federation’s residents.  This year’s “Heartbeat” will take place in the Wesley Methodist Church Hall, known as the old Boys School in early June.