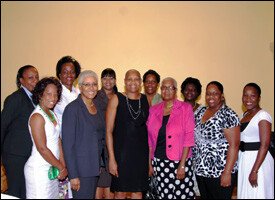 The Executive members of the Nevis Reformation Party (NRP) Women’s Arm participated in International Women’s Day celebrations in St. Kitts on Sunday, March 7th at the Marriott Hotel.  The lavish event was hosted by Minister of Gender Affairs in the Federal Government, Hon. Marcella Liburd.

President of the NRP Women’s Arm, Mrs. Monica Tyson, described the event as a great way for women of the Federation to get together regardless of political affiliation, she also said it that it was a fantastic way to prepare women to get more involved and be supportive of one another during these difficult and challenging times.

The Hon. Mary Anne-Chambers, former Minister of Children and Youth services in Ontario, Canada was the featured speaker.  She spoke on her personal experience as a mother, wife, businesswoman and politician.

“People may define you as a woman who must stay home and take care of the family and that is it!  Do not let anyone define who you are or what you may become.  The definition of who you are must come from who you see yourself as and you would like to be,” commented Mrs. Chambers.

During the Woman’s Day event, songs and poems celebrating women hood were sung and read and there was a dance presentation which captured the attention of those present.

A touching highlight of the evening for many was the story of a young lady who was a teen mother. She spoke of her experience of going to a special school to continue her education and the challenges she faces raising her child as a single parent.  However, she said her resolve was not deterred and refused to let this “hump” in the road of life be a stumbling block for her.  At present she is pursuing a career in business law.

The audience gave a thunderous applause to the young lady who said in conclusion that she would never give up in her quest to succeed.

International Woman’s Day is celebrated worldwide annually on March 8th.  It is recognized globally, celebrating the economic, political and social achievements of Women of the past, present and future.