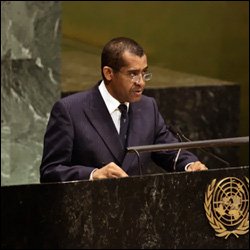 St. Kitts and Nevis was among the 187 nations that voted this week for an end to the United States economic and trade embargo against Cuba. The vote recorded was 187 in favour to 3 against and 2 abstentions.

The 192-Member Assembly in its resolution urged the lifting of stiff commercial, financial and economic sanctions that were slapped on Cuba in the aftermath of the cold war.  This marked the eighteenth year the world body had adopted a similar resolution on the issue.

As happened last year, a burst of applause greeted the Assembly’s passage of text that reaffirmed the sovereign equality of States, the non-intervention and non-interference in their affairs, and the freedom of international trade and navigation.  The two-page document again called upon all States to refrain from promulgating and applying laws and measures such as that promulgated in the 1996 “Helms-Burton Act” which carried extraterritorial effects that impacted the sovereignty of other States.

St. Kitts and Nevis Permanent Representative to the United Nations, His Excellency Delano Bart, Q.C. speaking on behalf of the Caribbean Community (CARICOM), reiterated its unequivocal opposition to the United States’ imposition of the economic, commercial and financial embargo against Cuba, which had been opposed by the overwhelming majority of the international community for the past 17 years.

Mr. Bart said that the unilateral imposition of extraterritorial laws on third States was contrary to both the letter and spirit of the United Nations Charter.  The embargo ran counter to the principles of multilateralism, international law, sovereignty and free trade that the body traditionally championed.

He said that the punitive embargo was of particular concern to CARICOM, which maintained close relations with Cuba through wide-ranging cooperative programmes in areas such as trade, health care, infrastructure, human resource development and other areas.

Its future regional development was reliant in many ways on the area’s collective advancement and progress.  The embargo was not just a punitive act against Cuba, but an impediment to the region’s shared development.

He referred to the Secretary-General’s report that showed that the embargo even impacted the manner in which organs and agencies of the United Nations system carried out their work in Cuba.

The embargo’s impacts on the Cuban economy and its humanitarian impacts on the people of that island nation in the areas of health care and food were especially saddening, he said.

Continuing, he said that with the increasing frequency and strengthening of hurricanes wrought by climate change, the embargo’s unacceptable humanitarian impact was even more acute.  It was remarkable that Cuba continued to help other nations in the developing world even as it struggled with a recent string of natural disasters and the impact of the global economic crisis.

Despite the long history of dashed hopes, CARICOM believed that a new beginning was possible in the relationship between the Governments of Cuba and the United States.  But the lifting of the embargo was a prerequisite of any meaningful rapprochement between the two countries, not a negotiated end result.

Even with recent positive indicators of flexibility, CARICOM noted that the United States’ Trading with the Enemy Act, which listed only Cuba as its target, was renewed just last month.

Introducing the resolution on the Cuban trade embargo, Minister for Foreign Affairs of Cuba, Bruno Rodriguez Parrila, called the blockade an “uncultured act of arrogance” that had hampered the development of Cuba’s economy and was also applied to other countries that wanted to carry out business with the Caribbean nation.

He said it was an “absurd policy” that caused suffering and led to shortages of basic necessities.  The embargo was a massive, flagrant and systematic violation of human rights.  In the Geneva Convention of 1948, it was classified as an act of genocide, he added.