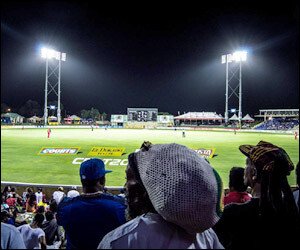 The Warner Park Cricket Stadium in St. Kitts has received even more accolades having been assessed the best pitch and outfield among the eight venues that hosted matches for the 2014 Limacol Caribbean Premier League (CPL).

The facility received favorable comments from players, coaches and officials throughout the Twenty20 tournament and a press release from the CPL revealed that a panel consisting of CPL Pitch and Field Consultant Kent Crafton; International Director of Cricket Tom Moody; Chief Operating Officer Pete Russell and Cricket Operations Director Michael Hall, voted the ground as the best.

“It was a job well done for us to have this prestigious award,” Minister of Sports the Honourable Glenn Phillip stated, singling out the grounds crew headed by Steadroy Douglas. “Those are the guys who carried the mantle in terms of the preparation of the field and the pitch and so I give kudos to them.”

The CPL panel was sure to “pay special homage to Warner Park’s grounds and caretakers” the October 23, 2014 release said. The facility outranked others in Trinidad, Barbados, Jamaica, Guyana, Grenada, St. Lucia and Antigua.

Minister Phillip said that this was further proof of the wise decision made by the local Government to upgrade the island’s premier sporting facility in order to stage nine CPL matches in St. Kitts and Nevis which included a celebrity charity match as well as the semifinals and final.

“The investment definitely paid off. There’s no way that we [Government] can pay for St. Kitts and Nevis to be beamed into 220 million households,” he stressed, citing official viewing figures for the 2014 CPL. That exposure covered traditional advertising markets such as the United States and the United Kingdom, but it also included areas where the tourism offerings of the twin-island Federation are not as common such as Australia, New Zealand, India and others.

“During the broadcast, five minutes of every game was dedicated to the promotion of St. Kitts and Nevis so in that way it definitely paid off,” Minister Phillip emphasized. The promotional video package did not include the random scenic shots or the interviews with local and visiting personalities who each shared their experiences. Additionally, Prime Minister the Right Honourable Dr. Denzil Douglas appeared on the radio and television broadcast, on multiple occasions to promote the destination. Local businesses, hotels, vendors, taxi drivers and the like also benefited from the 10-day CPL experience.

Minister Phillip said negotiations are already on the way to stage matches for the 2015 tournament.