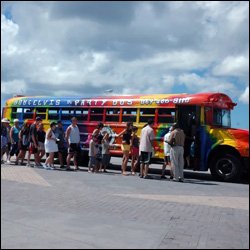 “We have expanded and improved the Robert L Bradshaw International Airport so that our Federation can now proudly boast of direct flights to London, New York, Miami, Atlanta and Charlotte,” said Prime Minister Douglas.

Since taking office in July 1995, the St. Kitts-Nevis Labour Administration American Airlines has begun scheduled daily flights from Miami and twice daily flights from JFK in New York. US Airways operates a weekly flight from Charlotte, North Carolina on Saturdays. Delta Airlines has flights on Wednesdays and Saturdays to the Robert L. Bradshaw International Airport. British Airways has been operating a weekly flight from Gatwick-London every Saturday and will introduce a second flight on Wednesday in March this year.

“We have redesigned Port Zante and secured it with an expansive revetment project so that we are now one of the leading cruise ship destinations in the region, and we now attract nearly a half million cruise passengers to the Federation each year,” said Prime Minister Douglas.

Dr. Douglas also boasted of his administration’s construction of the Silver Jubilee Athletic Stadium, the Conaree Cricket and Football Stadium, the St. Paul’s Stadium and the Warner Park Stadium.

Dr. Douglas said that the Federation’s progress in tourism has impacted people from all walks of life in society.

“Some 130 new taxi drivers were licensed in 2009 alone and we have seen a range of new tourism related enterprises established throughout our Federation,” said Dr. Douglas, who pointed to expansion in the range of restaurants, arts and craft vendors, caterers, tours operators, entertainers and performers and various supplier and service providers in other sectors of the economy have all benefitted by selling to the tourism sector.

1 thought on “St. Kitts – Nevis Tourism Is On The Rise”