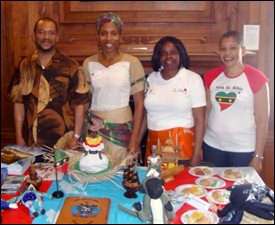 St. Kitts – Nevis was afforded valuable exposure when the Embassy of St. Kitts & Nevis to the United States collaborated with the St. Kitts Tourism Authority to establish an impactive presence at the Fifth Annual Meridian International Children’s Festival in Washington DC.

The event which was held on Saturday, May 21, 2011, provided the opportunity for embassies from around the word to promote their nations’ tourism products while displaying various aspects of their culture.

According to the St. Kitts & Nevis Ambassador to the United States, Her Excellency Jacinth Henry-Martin, “the opportunity was an invaluable one, given the profound impact we were able to make due to the creativity and determined teamwork of the staff, despite our limited resources.”

Kemoy Liburd-Chow, First Secretary at the Embassy, donned the St. Kitts & Nevis National Dress, while other members of staff wore batik and other garments of national significance.

The children in attendance, the offspring of Washington DC based diplomats from around the world enthusiastically engaged in activities such as “pin the tail on the vervet monkey” and colouring blank copies of the Federation’s national flag.

Various items of craft made from coconut, the chosen theme of the day, were also on display.  As an added attraction and welcome delight, visitors to the booth also enjoyed sampling treats such as sugar cakes, coconut drops and coconut tarts to further reinforce the “˜coconut’ theme which, like the beach, is almost synonymous with the Caribbean.

St. Kitts Tourism Officer, Abdullah Skerritt, opined that “the fact that we were the only Caribbean nation present at the event gave St. Kitts & Nevis a unique opportunity to shine among other exotic tourist destinations from around the globe.”

The Federation was promoted as “Two Islands, One Paradise” to the hundreds of attendees, potential visitors who were introduced to the nation and its rich culture.  Various aspects of our tourism products were discussed with diplomats, many of whom are seeking nearby destinations for brief getaways.

Embassy staff event coordinators also included Verlyn Maynard and Verona Greene, both of whom played an integral role in keeping patrons engaged and informed throughout the day.