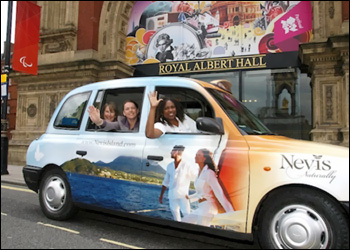 Millions of United Kingdom nationals and visitors to the British capital will not only see, but ride in a taxi cab with a difference.

Displaying the eye-catching imagery featured in the recent brand refurbishment of St. Kitts and Nevis, the liveried Taxi has officially taken to the streets of London, to promote and raise awareness of the destination during the all-important London Olympics year and through to 2013.

To ensure a fully round Campaign, the driver of the St. Kitts-Nevis Taxi will play a key role as an ambassador for the destination, highlighting both islands’ attractions to his passengers as they travel around London. Tip-up seats inside the taxi cab will also showcase St. Kitts tourism partners, while the outside of the cab displays the website addresses of both islands.

Rosecita Jeffers, CEO of the St. Kitts Tourism Authority, said: “This is an exciting promotion for St. Kitts and Nevis, particularly when all eyes will be on London and the Olympics in the coming weeks.  The iconic status enjoyed by the London black cab makes it an ideal platform to promote and raise the profile of the destination and we are looking forward to noting the reactions of Londoners as well as the thousands of visitors due in the next few weeks.”

Paul Tremarco, sales director at London Taxi Advertising, added, “London Taxi Advertising is proud to launch a twelve month taxi advertising campaign for St. Kitts and Nevis, one of the most seductive spots in the Caribbean. The campaign launch is timely with the influx of visitors expected in London for the 2012 Summer Olympics and will raise awareness of the destination with the largest ever outdoor audience in London.”

“We champion travel and tourism clients using taxi advertising, the unusual advertising space showcases St. Kitts and Nevis’ beauty, igniting the public’s interest in the destination. The vibrant taxis are sure to tempt Londoners away from the rainy July weather!”

The St. Kitts and Nevis Taxi Campaign will be supported by a number of marketing initiatives during the course of the year, including Caribbean Month in September, St. Kitts Tourism Week in October and during the lead up to World Travel Market.  It will also be incorporated within travel agent incentives in 2012 and 2013.

Supporting the Campaign will be social media activities incorporating My St. Kitts Facebook Page and Twitter, including a “˜Spot The Taxi’ Competition.

St. Kitts and Nevis is currently served twice-weekly on Saturday and Tuesday from London- Gatwick by British Airways, the first scheduled carrier to provide regular airlift to the island.