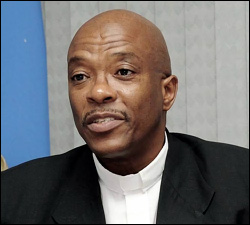 Catholic priest Monsignor Kenneth Richards, appointed as the next Bishop of the Diocese of St John’s-Basseterre, which includes Antigua and Barbuda, St. Kitts and Nevis, Anguilla, Montserrat and the British Virgin Islands has been hailed as a dedicated Christian leader, who backs his words with actions in improving the lives of the poor.

At a farewell mass in Jamaica before he leaves for his next assignment in the Eastern Caribbean, hundreds of Richards’ parishioners, friends and well-wishers, led by Governor General His Excellency Sir Patrick Allen, Archbishop of Kingston Most Rev Charles Dufour and several other priests were on hand to celebrate mass with him at the picturesque Holy Trinity Cathedral which he has headed for the past seven years.

After the ceremony, the 53-year-old priest was mobbed by adults and children alike clamouring to hug and talk with him before he leaves for his next mission.

Archbishop Dufour, in bringing greetings, quoted the famous lines from Charles Dickens A Tale of Two Cities: “It was the best of times, it was the worst of times” to illustrate the mixed emotions felt in Richards’ departure.

He said Richards’ leaving “came at a time of severe shortage of priests in the church,” but for the people of the Eastern Caribbean who “prayed unceasingly for five years for a shepherd,” their prayers had been answered.

The archbishop said while the Roman Catholic Church in Jamaica was losing one of its finest and most dedicated priests, Jamaica continued to provide quality leaders to the church in the region.

Jamaica newspapers report General secretary of the Jamaica Council of Churches (JCC), Rev. Gary Harriott described Richards as “The Action Man” and recalled his leadership as JCC vice-president, president of the Downtown Kingston Ministers’ Fraternal, peace-building initiatives in troubled communities, intervention in the West Kingston operation in May 2010, continued restoration of the Holy Trinity Cathedral and advancing the ecumenical project.

“It is difficult for us to let him go,” said Rev. Harriott, adding that “the mission belongs to the Lord Jesus Christ.”
Executive director of the Institute of Jamaica (IOJ) Vivian Crawford thanked Richards for his work as an IOJ board member and board chairman of the IOJ’s junior centres. He expressed the hope that he would return to Jamaica as archbishop in the future.

Richards, in his homily, said his promotion was a call to which he had to respond as he sought to “follow the voice of the Lord.”

He reminded the congregation that as Christians they were begotten of God and that they should symbolise Christ in their actions.

He also called on persons in positions of influence not to be selfish or partisan in addressing the country’s problems.