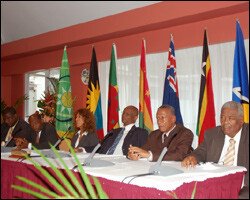 “An incredible juncture in the historic evolution of the OECS,” is how St. Kitts and Nevis’ Prime Minister Hon. Dr. Denzil L. Douglas is describing next week’s signing of the Treaty which takes the sub-regional grouping to an Economic Union.

The signing on December 29th 2009 will take place in the St. Kitts capital, venue of the signing of the Treaty of Basseterre on June 18, 1981.

“The new arrangements envisaged under the treaty represent a fundamental philosophical transformation and political commitment to deepening the level of integration among member states through the establishment of an Economic Union and the creation of a Single Financial and Economic Space,” said Prime Minister Douglas, the current Chairman of the Authority of the OECS Heads of Government.

“This proud moment of real historical significance to St. Kitts and Nevis and the Region” takes place in the Sir Cecil Jacobs Auditorium at the Headquarters of the Eastern Caribbean Central Bank (ECCB).

The ceremony, which is expected to be attended by member states of the OECS, begins at 5:00 p.m.