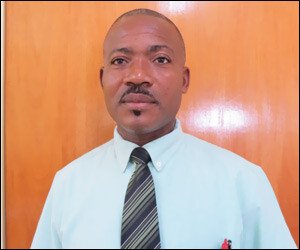 Persons who were registered after November 30th 2014 will not be eligible to vote in the February 16th 2015 general elections.

He called on persons to examine the register of voters to make sure that their names are listed before going to the poll.

“This simple exercise of examining the Register of Voters could serve to avoid disappointment on polling day,” said George.

He informed the general public that Polling Day is Monday 16th February.

He said a list of the location of Polling Stations will be published in the local newspapers and broadcast on local radio stations.

He said these officers have been carefully selected based on their known ability, integrity and id experience.

He said that the functioning of the Presiding Officers and Poll Clerks will be observed by agents of candidates.

“Candidates are therefore asked to name their agents who will sit inside the Polling Stations with the Presiding Officer and Poll Clerks.  This provision is made in order to give candidates representation and the opportunity to monitor the fairness of the conduct of the poll. The working procedure will be explained to the workers by the Presiding Officers in the presence of the candidate’s agents,” said Mr. George.

“For the guidance of all voters, I should mention that each voter may vote only at one Polling Station and for only one candidate. Voters should make their mark (x) with a pencil which will be provided at each polling station.  The mark (x) should be placed in the space opposite the name of the candidate for whom the voter is voting. It is important to also point out, that voters will be required to dip one of their fingers in the electoral ink before the ballot paper is deposited in the ballot box,” said Mr. George, who added:

“The provision of ballot paper is a very serious and important aspect of the preparations for the elections. The Electoral Office has therefore taken security measures, beginning from the transportation of the paper to the actual printing and storage of the ballots, in order to ensure that there is no tampering with the ballot paper.”

He disclosed that arrangements will also be made for the agents of the various political parties and the security forces to observe the transportation of the paper from the local business place of purchase to the government printer, as well as the actual printing of the ballot paper.

He further pointed out that after the close of the poll, the ballot boxes containing the ballots cast will be sealed.

The counting of the ballots is expected to commence at 8:00 PM in the evening of polling day.

The results will be carried live on ZIZ Radio and Television and may also be announced on other radio stations during that said evening.