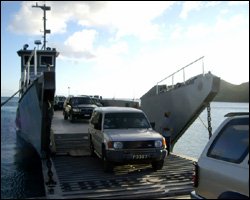 He said there will be increased vigilance at the ports of entry and Customs and police officers will be deployed at the borders and port security officers both in Nevis and St. Kitts will move quickly to co-ordinate strategies and approaches to tackle the problem.

“Whereas in the past the jurisdictional authority of our port police used to be limited to the narrow confines of the port, those days are over.  The port police of St. Kitts and Nevis, so designated will be given constabulary powers to enable them to pursue and arrest ““ beyond the physical confines of the port itself.  These officers will be empowered to move with authority.  And move with the power of the state behind them in their determination to identify, pursue, and apprehend anyone who attempts to bring illegal firearms ““ instruments of death and destruction ““ into the neighbourhoods and communities of St. Kitts and Nevis,” said Dr. Douglas, who is also Minister of National Security.

Speaking on his weekly radio programme “Ask the Prime Minister,” Dr. Douglas said his St. Kitts-Nevis Labour Government is moving to put in place legislation that would permit more thorough monitoring of persons and vehicles traveling between the island of St. Kitts and the island of Nevis.

“We have to pay greater attention to the ferries”¦..and the sea bridge.  And those who are bent on using these mechanisms to facilitate the transfer of illegal firearms will be encountering serious resistance,” said the Prime Minister.

He said the authorities were now revisiting the sentencing guidelines for the smuggling, possession, sale, or use of illegal firearms in the commission of a crime.

“And the penalties imposed will be harsh as the people of this country and the criminal justice system will permit,” said Dr. Douglas, in response to eight homicides so far this year.

“Charging and prosecuting criminals is one thing.  The protection of witnesses is another.  And so, this government has been looking long and hard at the way the criminal justice currently operates, in an attempt to find ways to increase the safety of witnesses,” said Dr. Douglas.

He applauded the recommendations offered at last December’s National Consultation on Crime, and thanked the work of the Implementation Task Force on Crime by speeding up the administration of justice thus denying the defendants the opportunity to intimidate witnesses.