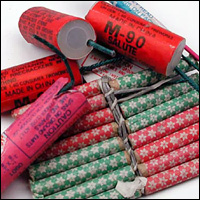 Examples Of Pyrotechnics That Are Banned

Basseterre, St. Kitts, (Thursday 21st October 2010). The Police wish to inform the general public that a temporary ban on all explosive fireworks (bombs) especially those associated with Guy Faulks celebrations shall have immediate effect.

This is part of the ongoing efforts in the fight against illegal firearms and other gun related crimes.

We appeal to all business places and the general public to cooperate with the Security Forces in the interest of safety and security.

The Security Forces will be vigilant in the enforcement of this ban on all explosive fireworks.