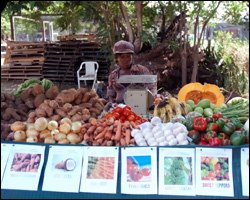 St. Kitts is reporting significant increases in some food crops.

Minister of Agriculture, Hon. Cedric Liburd in reiterating government’s policy to secure food for self-sufficiency and work towards sustainable development throughout the year reported a 115 percent increase in carrot production with 378,400 pounds in 2008 compared to 176,000 pounds in 2007. Onions increased from 48,400 pound in 2007 to 112,200 pounds in 2008, up 131 percent.

The passage of Hurricane Omar in the third quarter and flooding in the last quarter of 2008 adversely affected vegetable production resulting in a decrease in the production of cabbage, (24 percent), sweet pepper (15 percent); tomato (17 percent); peanut (50 percent) and watermelon, 36 percent).

The increase in production could be attributed to improved agronomic practices, thus resulting in increased yield and farmers cultivating large acreages as a result of some of the former sugar lands being made available for crop production.

The rise in production was due mainly by increased purchases by supermarkets where local beef was available at a competitive price and the efforts to remove the animals from the South East Peninsula.