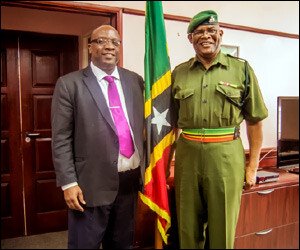 Security matters and preparations for the upcoming Tradewinds Training in St. Kitts and Nevis were among issues that dominated discussions between Prime Minister Dr. the Honourable Timothy Harris and Commander of the St. Kitts and Nevis Defence Force Lt. Colonel Patrick Wallace.

The meeting, which featured a status of the force report, was held on Wednesday (March 11) at Government Headquarters.

Regarding Tradewinds 2015, the Prime Minister was informed that St. Kitts and Nevis will be hosting the Maritime Phase from May 31 to June 09. Tradewinds is sponsored by the United States Armed Forces and is designed to promote regional security cooperation. Personnel from 11 countries participated in the Maritime Phase last year. Over 200 persons are expected to attend this year’s phase in the Federation.

The Prime Minister said the session was fruitful as he was updated on a wide range of security subjects. Prime Minister Harris also reiterated his support for security agencies in his capacity as the Minister of National Security.