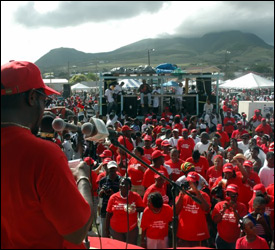 The St. Kitts and Nevis Cabinet has received the first draft of the Review of the Minimum Wage.

Dr. Douglas disclosed that the Minister of Labour has informed Cabinet that the first draft from the stakeholders who are looking at the review and the increase in the minimum wage has been received.

“Our people need to ensure that they can have an increase in the minimum wage so that they can be better able to cope with the cost of living. Your Government is ensuring that this will happen shortly,” said Prime Minister Douglas who added that his Government must also ensure that the Private Sector is engaged fully as a partner in nation building while in pursuit of positive margins of operations.

“Creativity within the Private Sector is key. Certainly, it is important to review wages and salaries and to come to a solution without adding to inflationary pressures,” said Dr. Douglas.

At the end of the traditional Labour Day March last May, Prime Minister Douglas disclosed that the Ministry of Labour had been directed to begin the process of consultations with the relevant stakeholders with a view of increasing the minimum wage so that the domestic workers and the girls at the Industrial Estates can better cope with the rising cost of living.

Dr. Douglas also gave the assurance that his Government is fully capable of transforming the economy of St. Kitts and Nevis.

“They talk about change. We have been doing changes in this country for the last 13 years and we shall continue meaningful and significant change for the betterment of the people of St. Kitts and Nevis,” he said.

“We will ensure that Civil Society, the Private Sector and workers’ organisations are on board, finding ways and means to grow the economy for the benefit of all concerned. We will ensure that our programme of transformation and change is clear and consistent, and provide you the public with information in the coming weeks and months,” said the Prime Minister.