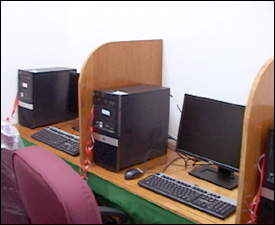 Officials at the General Post Office (GPO) in St. Kitts have called on locals to embrace the e-services of the facility as they continue to expand their scope of operation.

The GPO’s Information Technology Manager, Darren Veira, told SKNIS that the launch of an Internet CafÃ© last October, was a significant step in offering new services. He gave an assessment of the accomplishment.

“It’s been going very well since we did the launch,” he said. “We have more people coming in and using the Internet CafÃ© [but] it’s mostly tourists. We are encouraging more locals to come and use the operation.”

The Internet CafÃ© is located inside the Philatelic Bureau. Mr. Veira explained that patrons have had high praise for the comfort and setting of the environment as well as the price and other equipment that is available for use.

“We’ve been told we have the best rates and [the facility] is more comfortable and more private and secluded for people who may just want to be there and work privately, check their emails or go on Facebook and stuff like that,” Mr. Veira stated, citing other amenities available including a coloured printer, scanner and fax machine. “We also have WiFi,” he noted.

The Internet CafÃ© is open on weekdays from 8:00 a.m. to 4:00 p.m. although on occasions, it has remained open after working hours to accommodate demand for the service.

In a previous press release, Minister responsible for Post and Information Technology, Honourable Glenn Phillip, indicated that Post Offices in St. Kitts and Nevis are evolving and innovating into an information management platform that will provide credible ways to serve the general public better.