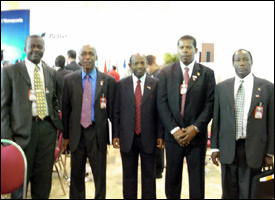 The St. Kitts – Nevis Delegation For The 2008 PetroCaribe Summit
Photo By Erasmus Williams

St. Kitts and Nevis is among 17 Caribbean and Central America nations that will make down payments of only 40 percent on Venezuelan oil, while cooperating to expand their food supply, and calling on the North to take measures to curb speculation on futures markets, which is resulting in surging crude prices.

“Petrocaribe must become an anti-crisis shield to protect us from hunger,” Venezuelan President His Excellency, Hugo ChÃ¡vez who hosted the Fifth Summit of this South-South alliance is quoted as saying.

Not only Energy ministers will attend Petrocaribe meetings in future. At the summit, held in the city of Maracaibo, 600 kilometres west of Caracas, a Council of Agriculture Ministers was created, which is to meet for the first time on July 30 in Tegucigalpa, Honduras.

Petrocaribe was created in 2005 as a Venezuelan initiative to supply fuels, as well as extend payment facilities and logistical and technical help, to neighbouring countries that are net oil importers.

Under the Petrocaribe agreement, Venezuela has been sending 92,000 barrels per day (bpd) to Cuba and has made available up to 135,000 bpd for the other countries, although the effective demand has been 86,000 bpd, according to Venezuelan Energy Minister His Excellency Rafael RamÃ­rez.

In three years, Venezuela has supplied 59 million barrels of crude to its Petrocaribe partners, for which they paid 50 percent of its value within 90 days and the rest on credit over 25 years, with a two-year grace period and an interest rate of one percent a year, saving them 921 million dollars.

Venezuela is also developing joint venture companies to provide infrastructure for storage and distribution costing 550 million dollars, and has invested another 100 million dollars for social purposes in these countries.

In St. Kitts, the ground is being prepared for the construction of the storage tank farm. Construction is to last 12 months.

But from now on, and as long as the benchmark price for North Sea Brent crude remains above 100 dollars a barrel, St. Kitts and Nevis and other PetroCaribe beneficiaries will be paying only 40 percent of their oil bill within 90 days, with the rest on the same terms as before. ChÃ¡vez announced that if the price of oil reaches 200 dollars a barrel, only 30 percent would have to be paid in 90 days.

“If things carry on like this, after a certain point we will have to think about freezing prices,” said Chavez, without elaborating on what he had in mind.

Furthermore, ChÃ¡vez encouraged the Central American and Caribbean countries to make their down payments for oil ‘with cattle, beans or tourism services.’

At those prices, “our farmers cannot produce, and if they do the prices will be higher than for imported food, increasing our dependency,” he said.

Venezuela, which produces two million tonnes of urea a year, offered to sell 100,000 tonnes a year to its Petrocaribe partners at a 40 percent discount, half to be paid on receipt of the product and half when the crop is harvested.

The outcome document of the Fifth Petrocaribe Summit urges the regulatory authorities of the futures markets in the New York and London stock markets to take the necessary measures to eliminate speculation as a factor in the international prices of oil and other commodities.

Venezuela, for its part, made a commitment, to set aside 50 cents of each dollar for every barrel of oil exported outside Petrocaribe at a price over 100 dollars, in order to create a subregional fund for food security initiatives.

Such a fund would accumulate around one million dollars a day.

Finally, ChÃ¡vez proposed handing over a crude oil exploration and exploitation block in the Orinoco Heavy Oil Belt — in the southeast of the country — to an association of the state oil companies of the Petrocaribe partners, for their consumption needs. He said Venezuela in turn could build fertiliser plants or refineries in several of these countries.