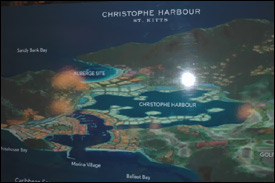 The St. Kitts Mandarin is among the 21 hotels and 18 properties in the pipeline, as the Mandarin Oriental group is embarking on an unprecedented level of growth in the next three years, especially in the Americas.

Mandarin Oriental, who just opened its first Mexico property this year, will also look to expand their portfolio in that region with Costa Rica, Grand Cayman, and St. Kitts.

Last year, the Mandarin Oriental Hotel announced in New York and St. Kitts its intention to establish a luxury hotel resort in St. Kitts and Nevis which it expects will become its flagship resort in the Caribbean.

Firesky Ventures, Auberge Resorts and Kiawah Development Partners unveiled a comprehensive tourism development programme for the Southeast Peninsula, that would launch the Federation to the forefront of the high-end, luxury sector of the Caribbean tourism market.

Currently, the Mandarin has holdings in San Francisco, New York, Miami and Washington, but in the next three years the Mandarin Oriental will look to opening hotels in Boston, Chicago, Las Vegas and even Dallas.

“We’re attempting to push our new Hideaway Resorts [in the US], and it’s not something that we’ve been doing a lot of in the past… it’s a bit of a marketing experiment with the concept and we’ll see how that goes,” he said.

“North America seemed like the right market to do this in.”

“Having properties in key markets is the best way to showcase the Group,” says Mr. Koh.  “It makes my job easier, when travellers can see a Mandarin Oriental hotel in their home city… then they’re more likely to book it when overseas.”

“Of course, the issue is that we must do it well… and I think we do a pretty good job.”
China will also be a focus for the group, in particular Shanghai, said Mr Koh.  He revealed that the group would look to have three properties in the global hub.