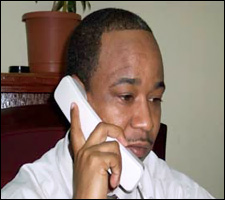 Senior Foreign Service Officer in the Ministry of Foreign Affairs, Mr. Samuel Berridge, is representing St. Kitts and Nevis at a series of preparatory meetings prior to the Second CARICOM-Mexico Summit in Barbados.

Trade, investment, tourism and cooperation will feature prominently when Caribbean Community (CARICOM) leaders meet with their Mexican counterpart in Barbados on Monday.

Mexico was the first country to form a Joint Commission with the Community having signed the agreement in 1974, the statement said, noting that the first summit between the two parties was held in 2010 in Mexico.

It said during the Barbados summit, the regional leaders “will also take the opportunity to impress upon the Mexican President His Excellency Felipe Calderon the importance of Mexico continuing to advocate on the Community’s behalf with respect to reform of the International Financial Institutions (IFI) at a meeting of the G20 which Mexico will be hosting next June”.

Last month, the regional leaders during a brief meeting with President Calderon in Cartagena, Colombia, had expressed concerns that since many CARICOM countries are classified as small highly indebted middle income countries they are prohibited from accessing the concessional facilities and instruments from the IFIs.

CARICOM Chairman His Excellency Desi Bouterse, who is also the President of Suriname, President Calderon and CARICOM Secretary-General His Excellency Irwin LaRocque will address the opening ceremony of the Summit on Monday at 10.30 a.m. (local time).

“Relations between CARICOM and Mexico are based on an agreement signed in Kingston, Jamaica in 1974, whose objective is to identify and promote cooperation initiatives in order to enlarge economic, political and cultural relations.

“This was advanced in 2009 during the Fifth Meeting of the Joint Commission when both sides signed a declaration in which they expressed their commitment to promote cooperation in areas such as trade and investment, air and maritime transport, financial services, security, health, energy and climate change,” the CARICOM Secretariat said.