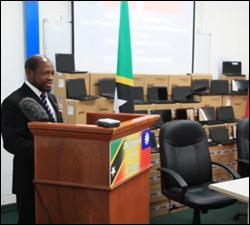 In accepting one of the laptops, under Phase Two of Government’s One-2-One Laptop Programme from Resident Taiwanese Ambassador His Excellency Miguel Tsao, Prime Minister Douglas said the laptops will be distributed to high school students on St. Kitts and Nevis entering the Fifth and Fourth Forms at the start of the new academic year in September.

“Phase Three will have another 2400 laptops for all of our students in Form One to Form Three and this should be just after September, maybe October or November or just in time I believe for their Christmas present,” said Prime Minister Douglas at the handing over ceremony.

“We must ensure that they can become entrepreneurs in their own right. As they become much more acquainted and familiar with the use of the laptop and as they go in search of knowledge and prepare themselves for the world of work,” said Prime Minister Douglas.

He said the closure of the sugar industry in 2005 and the decision to transform the old economy and move it into a services economy includes information technology as a critical plank.

“We believe that to allow students free access in the search of knowledge would definitely bring them into a position where it can be much more competitive and allow them to take their places among their peers around the world as they search for knowledge and use the new technology for their personal advancement and that of St. Kitts and Nevis,” said Prime Minister Douglas.

He expressed thanks to Ambassador Miguel Tsao, the Taiwanese Embassy, the Ministries of the Government of St. Kitts and Nevis, Minister of Information Technology, Hon. Glen Phillip and Chief Secretary, Mr. Joseph Edmeade, who has been the coordinator of the project through the Office of the Prime Minister and all the other member of his team.