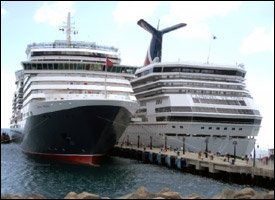 The parade of cruise ships into the Basseterre Roadstead continued on Saturday with the visit of just over 7,000 passengers and nearly 3,000 crew members on three ships.

Making her maiden visit to St. Kitts – Nevis was the Queen Victoria, sister ship of the QE2 and the Queen Mary with 1,847 passengers and 989 crew. The Queen Victoria arrived from Antigua and later sailed for St. Lucia.

The Carnival Victory arrived from Antigua with 3,299 passengers and 1,050 crew. It sailed for Puerto Rico later in the afternoon.

The MS Noordam arrived from Fort Lauderdale, Florida with 2,041 passengers and 783 crew and sailed later for St. Lucia.

While the Carnival Victory and the Queen Victoria berth at Port Zante, the Noordam berth at the commercial pier at Bird Rock.

Most of the passengers on the three ship disembarked and went on sight-seeing tours via taxis, tour buses and the St. Kitts Scenic Railway; shopping, sun and sea-bathing, hiking, horse-back riding, snorkeling, golfing, kayaking and sailing.

The visit of the three ships on Saturday brought the number of cruise ships for last month to 23.

Last week, the 3,100-passenger Emerald Princess visited on Sunday, the 2,450 passenger Constellation, the 2,620 passenger Queen Mary and the 1,875-passenger Island Star visited on Tuesday and on Wednesday 17th the 255-passenger Royal Clipper and the 2,850-passenger Solstice visited, bringing the total to just over 20,000 passengers.

This week, over 9,000 passengers are expected. The 1664-passenger Thomson Destiny visits on Tuesday 23rd December; the 1,627-passenger on December 24th; the 708-passenger Seven Seas Voyager on December 25th and the 3,473 passenger Carnival Victory and the 1,875-passenger Island Star on Saturday 27th.