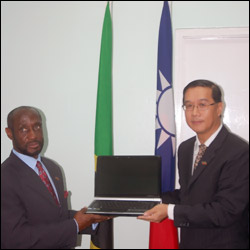 Deputy Prime Minister and Minister of Foreign Affairs, Hon. Sam Condor said Tuesday that the presentation of information technology equipment from the Republic of China on Taiwan “is a gesture of goodwill that showcases the continued good relations between our countries that began at the genesis of St. Kitts and Nevis’ involvement as an independent country in world affairs.”

“The relationship between our two countries has remained strong throughout many developments in the international arena,” said Deputy Prime Minister Condor as he accepted the Desktop Computers, Laptop Computers, printers and accessories from Resident Ambassador of the Republic of China on Taiwan, His Excellency Miguel Li-Jey Tsao.

Deputy Prime Minister Condor noted that the request for assistance from the Taiwanese Government was made in December last year.

He pointed out that the recent visit of Prime Minister the Honorable Dr. Denzil Douglas to Taiwan to discuss areas of mutual interests would strengthen the relationship.

“The contribution of computers today is another example of this cooperation,” said the Minister of Foreign Affairs.

He said the Ministry of Foreign Affairs of St. Kitts and Nevis has traditionally been the point of first contact with the Government of the Republic of China (Taiwan), and the upgrade of the computers will serve to strengthen that engagement between both countries.

“I can assure you that the staff of the Ministry are extremely grateful and will put these computers to good use,” said Minister Condor, who is also National Security, Labour, Immigration, and Social Security.

“As we go forward towards an uncertain future, we are heartened by the fact that we have friends. St. Kitts and Nevis and Taiwan are colleagues in the international arena, and we remain committed to championing the causes of mutual interest to our peoples. We are confident that it is due to our friendship and good relations that the future, though uncertain, will be less rocky, and we will be able to weather every storm that comes our way in a collegiate manner,” said Minister Condor.