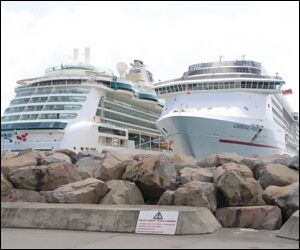 The tourism industry in St. Kitts – Nevis continues to boom with three luxury cruise liners which docked at Port Zante February 02 bringing with them close to 9,000 visitors.

According to an official at the St. Kitts Tourism Authority, the Carnival Pride made its inaugural visit to St. Kitts with 2,680 passengers departing from San Juan, Puerto Rico for a 10-day cruise. The Jewel of the Seas brought with it 2,500 passengers from its port of embarkation in San Juan, Puerto Rico, for a 7 night cruise and the Ventura carried 3,597 travelers, having departed from Southampton, England for a 28 night Caribbean Cruise.

Because Port Zante cannot accommodate three mega ships, one of the ships, Ventura, had to dock at the Basseterre Deep Water Harbour in Bird Rock. The Jewel of the Seas and the Carnival Pride docked at Port Zante.

With an expanding tourism industry in the federation, the Government of National Unity has revealed that plans are afoot to build a second pier at Port Zante later this year. Minister of Public Infrastructure, the Honourable Ian Patches Liburd, said last year that The Canadian Commercial Corporation has partnered with the government of St Kitts and Nevis to build a second cruise pier at Basseterre’s Port Zante.  He said that the second pier will be able to accommodate two mega cruise ships.

Prime Minister Dr. the Honourable Timothy Harris, who holds the portfolio as Minister of Finance, said that a thriving tourism sector augurs well for the economy and shows that the economy is growing and benefiting many persons such as the taxi drivers, the businesses at Port Zante, the restaurants and bars, and those involved in the cotton industry.