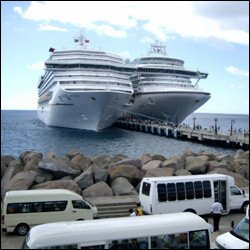 Figures from the Statistics Department of the St. Christopher Air and Sea Ports Authority (SCASPA), indicate that Royal Caribbean Cruise Line brought the highest number of passengers during that period.

Hospitality Times recently listed St. Kitts and Nevis among the 10 Smallest Islands in the World.

The St. Kitts’ Scenic Railway train was listed among 30 stunning heritage trains of the world and the only one in the Caribbean.

St. Kitts was named a top destination for 2011 by both AOL Travel and British Airways.  Located in the northern Leeward Islands of the Caribbean, it offers a diverse tourism product developed from the destination’s natural beauty, cultural heritage and rich history.