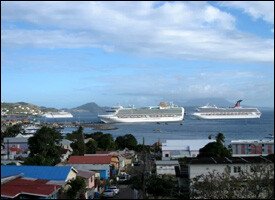 Nearly 14,000 cruise passengers streamed through downtown Basseterre, enjoyed tours around the island and took to the beaches over the weekend as seven ships visited St. Kitts – Nevis on Saturday and Sunday.

The four ships on Saturday and three on Sunday brought a total of 13,944 cruise passengers and 5,565 crew members.

The Victory sailed for Puerto Rico, the Azamara Journey went on to Martinique, the Island Star to Antigua and the Ventura to St. Lucia.

The Boudicca docked at Port Zante with 831 passengers and 324 crew members on Monday. It arrived from St. Barths and will depart for Antigua.

On Tuesday, the Constellation with 2,450 passengers and the 1,950-passenger Sea Princess will dock, while on Wednesday, Port Zante will be visited by the 2,281-passdemnger Galaxy and the 2,850-passenger Solstice on Wednesday 28th.

The Carnival Miracle with 2,680 passengers docks on Thursday 29th; the Ocean Village with 2,388 passengers comes on Friday 30th and the 3,473-passenger Carnival Victory berths on Saturday 31st.

An estimated 82,000, cruise passengers from 37 calls are expected to visit St. Kitts in January. A similar number is estimated to have visited in December from 40 calls and 51,000 from 22 calls in November.