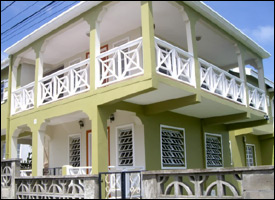 Recent private sector housing initiatives are evidence of the high level of confidence it continues to demonstrate as a result of the healthy investment climate that exists in the twin-island Federation.

“The private housing initiatives that are mushrooming all over St. Kitts and Nevis will continue to empower our people in terms of home ownership,” said Prime Minister Hon. Dr. Denzil L. Douglas at his recent monthly Press Conference.

“A home is the most valuable asset that most people – anywhere in the world – will ever own,” he said.

Since taking office in 1995, the governing St. Kitts-Nevis Labour Government under the leadership of Prime Minister Douglas has provided some 2,500 low-income, affordable, and middle-income homes, via several housing programmes of the National Housing Corporation (NHC). Recently launched in Half Way Tree was an EC$50 million programme for the construction of 500 homes.

The St. Kitts Co-operative Credit Union and Wilmor Enterprises have announced plans for new housing programmes and Howard Kaufman is soon to roll out its 4-Sight Mortgage and Turnkey Initiative.

The St. Kitts Co-operative Credit Union plans a Scenic Housing Development on several acres of land in the hills of St. Peters, which will provide its membership an opportunity to fulfill a dream of owning their own home.

The Credit Union brochure said the development will provide the membership with an elegant housing option, a location that is accessible, the opportunity to create a unique Caribbean Community, the opportunity for further advancement through investment, and the fulfillment of a lifelong dream.

“Several stylish designs are available for the members to decide on, along with the purchase of ample square footage of land.  These homes cater to small, medium, and large families, and are designed to provide adequate accommodations.  The possibility of purchasing the land first is also available as the institution recognises that some members may not be ready to start their home, but rather to acquire the land until they are,” the credit union said.

“The community will offer a sense of security for its children to play as well as the allowance for small business opportunity such as mini-supermarkets, convenience stores, daycares, etc.  This distinctive idea would serve to augment the community bonds that are presently being eroded throughout the Federation and the wider Caribbean,” said the brochure. The St. Kitts Co-operative Credit Union said the first phase of the project will be ready for sale by October 2008.

Howard Kauffman and Associates said its soon to be launched 4-Sight Mortgage and Turnkey Initiative, intends to give fillip to the expanding middle class, comprising primarily of professionals who recently graduated from universities, senior civil servants and others in management positions, who have the earning capacity to meet monthly requirements of a mortgage averaging between EC$250,000, but may not have the savings to meet the equity input and other costs required by commercial banks.

“The 4-Sight Mortgage Initiative will make it possible for this group of persons to be first time home owners at an early age. Mortgage Indemnity Insurance will be used to compensate for the equity input, as is generally required by commercial banks, thus making it possible for the client to receive 100% mortgage financing from participating banks,” said Howard Kauffman. The company said it is working with several of the major commercial banks in the Federation, which will provide long term, permanent financing.

It said that the Government’s Land Initiative is expected to form the marketing thrust of the project in which persons to whom housing lots are allotted.

The third company, Wilmor Enterprises, has built its first model home, which it said is capable of withstanding winds of up to 150 miles an hour.

The outside of the house is constructed with cement board covered with sturdy Trewelon and has a stucco finish. An added feature is that the house does not need painting for at least twenty years after construction.

The houses are built to meet Florida and California standards, two states which are known for hurricanes and earthquakes.