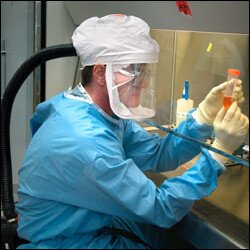 St. Kitts and Nevis is making the necessary preparations to ensure that the Federation is ready should there be an outbreak of swine flu in the region.

This is according to Chief Medical Officer Dr. Patrick Martin who updated the local media on the swine flu situation at a press conference hosted by National Emergency Management Agency (NEMA), Monday, April 27.

Dr Martin revealed that based on communication with the Caribbean Epidemiology Centre (CAREC) prior to the press conference time, there had been no suspected cases of swine flu in the 21 CAREC-member territories.

Scientifically termed virus H1N1, the swine flu has symptoms just like seasonal influenza which includes fever, throat ache, cough, breathing difficulty, weakness and sometimes joint pain.  It has been given a World Health Organisation (WHO) Alert Network pandemic alert level of four (4), the highest being six (6).  The Chief Medical Officer stressed that only laboratory tests would be able to confirm whether or not the strain of influenza is indeed swine flu.

He said it will take place at all airports, seaports and health facilities including hospitals, health centres as well as offices of private doctors.

Chief Medical Officer Martin explained that the type of surveillance taking place at entry points of the Federation would include checking individual passengers, posting signs, handing out leaflets with essential information including the numbers to call for assistance.

Pertaining to health facility readiness, Dr. Martin said that in meetings with the health facilities managers, he had been assured that the health facilities were either in a state of readiness or making ready for possible swine flu challenges.  The health institutions include the Joseph N. France General, Alexandra General and Mary Charles Hospitals, the Pogson Medical Centre and nursing homes.

Communication was said to be an important role for all, and the Chief Medical Officer noted the importance of the media but also the general public.  He advised that although the swine flu was cause for concern, it was not the time to panic.  Instead persons were urged to arm themselves with reliable knowledge about the illness.  He cited the internet web sites of WHO, CAREC, the Pan American Health Organisation (PAHO), the US Centre for Disease Control (CDC), Health Canada and the UK Agency for Public Health Promotion.  He said he had also been impressed with the Nevis Disaster Office website.