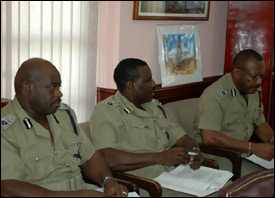 Nationals and visitors should expect increased police presence and high visibility foot and mobile patrols during the Christmas/Carnival Season.

This is the message from the High Command of the Royal St. Christopher and Nevis Police Force following the monthly strategic meeting of the Police Advisory Group (PAG).

The meeting also decided to continue aggressive patrols by Anti-Gang Unit in known hotspots, regular stop and searches and random vehicular check points (VCPs),  as well as robust patrols and surveillance of ports and open borders.

In outlining the strategic plan, already in effect for the Christmas and Carnival Celebrations, Commissioner of Police, Mr. Austin Williams said inter-agency co-operation with Customs, the Defense Force and Private Security will also be increased.

“We have to continue to be proactive. I am happy we have gone ahead months in advance to implement the strategic plan, and our successes are evident,” said the Commissioner.

During the meeting, he took the opportunity to thank the high level officers for their support and commitment throughout what could be considered one of the most challenging years.

He noted that the Police successfully provided security for the many events and festivals throughout the year without any major incident.

The Commissioner wished his officers well for the Christmas and Carnival Season and treated the high level officers to a sumptuous lunch at the Frigate Bay Beach Resort.