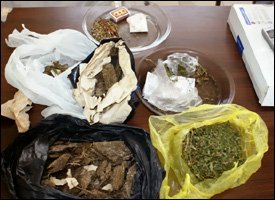 Police are investigating a shooting incident which occurred at Godwin Ghaut around midday on October 19th 2009. Investigations revealed that Alester Forde alias Red Ants was shot in the arm. He was taken to the JNF Hospital where he was treated and warded in stable condition.

Police are also investigating a shooting incident which occurred just after 2:00 p.m on October 19th 2009 at St. Johnston Avenue. Investigations revealed that two masked men attacked and shot Uttendale Whyte of Fort Thomas Road, then made their escape along Infirmary Road. The police who was on the scene shortly after the shooting, set chase after the masked men, one of whom sustained injuries after the officer drew his service pistol. The other masked man escaped. One 9 mm pistol and five rounds of ammunition along with a mask were recovered from the injured man who was identified as Devon Ryan of Blue Belle Alley. He was taken to the JNF Hospital by the EMS, where he was treated and warded. Both men are currently warded in stable condition. Investigations into both incidents are ongoing.

On Sunday 18th October 2009, a joint team of officers from the SSU, Drug Squad, Financial Intelligence Unit, anti-gang unit and the St. Kitts-Nevis Defence Force, executed a search warrant on the premises of Delon James of Mattingley Heights for controlled drugs, arms ammunition and documents used in the commission of a crime. A large quantity of compressed marijuana was found in the house. The marijuana along with several documents and other items were seized for further investigations. James was arrested and charged for possession of marijuana and possession of marijuana with intent to supply.

On October 16th 2009, Justin Morris of Mansion appeared before the District B Magistrate Court on charges of possession of firearm and possession of ammunition. He was convicted and sentenced to prison for three years on both charges to run concurrently. On February 21st 2009, during routine stop and search operations, Morris was searched by the police and the weapon was found on him.

At a sitting at the Basseterre Magistrate’s Court on the same day, Adolphus Gumbs alias AB of Mattingley Heights was convicted for driving under the influence of alcohol, and fined $1,000.00 in two months or two months in prison.