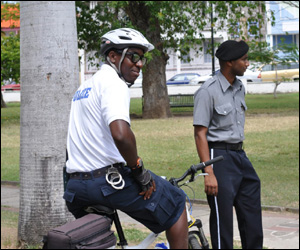 The Royal St. Christopher and Nevis Police Force will be stepping up patrols in the coming weeks as part of a new strategy focused more on prevention.

“We intend to make sure that there is a more proactive approach to patrol and crime prevention,” Commissioner of Police Celvin G. Walwyn disclosed in an interview with SKNIS. “We are no longer going to be reacting to things when they happen, we want to be there so they don’t happen.”

To achieve this, a number of measures have been put in place, the most significant of which will feature more officers from the highly trained Special Services Unit (SSU) being more visible.

“We want to put three maybe four squads from SSU on the street everyday in the Federation,” the police head stated, explaining that the duty will incorporate more foot patrol assignments. “The van will still be there in case we need to have a rapid response but we are going to have more visibility of the SSU officers patrolling the streets.  That is the new mandate for SSU and that will go in effect very soon.”

Changes have also been made to the Traffic Department which is now working longer hours. The plan is influenced by the desire to keep the motoring public and pedestrians safe. On Monday (February 17) officers will be deployed on motorcycles to enforce traffic laws, which is in keeping with the start of an anticipated highway patrol programme.

“He’s going to be out there patrolling the highways, using a radar gun and he’s going to be enforcing the speed violations especially against the minibuses,” said Commissioner Walwyn. “They have gotten out of control. The time has come to put an end to their behavior. We have started writing tickets on Baker’s Corner but we are going to be [patrolling] from Basseterre to Dieppe Bay [via] Cayon and Basseterre to Dieppe Bay going through Sandy Point. They’re going to be police officers on motorcycles and when they stop you, [there’s] no break, you’re getting a ticket.”

The ranks of the police force will also be reinforced in the coming weeks. A batch of more than 30 recruits are scheduled to graduate on February 27 after months of extensive training that began on July 01, 2013. The recruits also received invaluable hands-on experience as they regularly patrol and assist in various stations around the island.