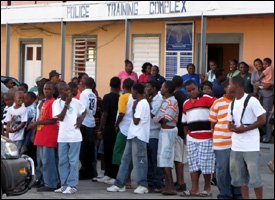 The Young Boys Arrive At The Camp
Photo By Erasmus Williams

Seventy- Four boys are currently camped at the Police Training School, as part of the activities of the Police Boys Club.  The camp was officially declared open on April 8th and will run until April 15th 2009.  A large number of parents turned up at the camp site to assist their children in the settling in process.  Coordinator of the camp Sgt. Adams during the opening ceremony, outlined some the activities that will be undertaken during the one week camp.  They include: lectures on topics such as Developing positive self esteem, Drugs and its effects on the body, Gangs: How to say no,  and How to cope with Peer Pressure.  Physical activities include a picnic and kite flying at Frigate Bay on Good Friday, Church Service on Sunday 12th at Zion Moravion Church, an island tour and visit to Nevis, drills and a cricket match against parents.

Insp. Cromwell Henry in declaring the camp open, said that the camp was part of the Police Forces efforts to reach the youth before they become involve in deviant behavior, and to give them alternatives so that they can be productive adults, of whom we can be all proud.

The camp was made possible with the kind assistance of the business community.  During the opening ceremony Mau Pau restaurant through its representative Mr. Dave Rogers presented a cheque valued at $3,000.00 to Sgt. Adams to defray some of the expenses of the camp.  Other donors include Digicel, and Island Bakery.