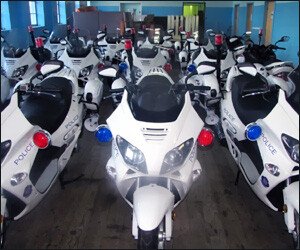 Drivers breaking the traffic laws in St. Kitts and Nevis are being put on notice; “there are a lot of changes coming” and they must “get used to it.”

That’s the message from Commissioner of Police Celvin G. Walwyn who revealed that the Government purchased 16 new motorcycles to reinforce the current fleet and allow a greater police presence on the highways and roadways.

A police motorcycle instructor from the Orange County Sheriff’s Office in Orlando, Florida, is expected in Basseterre in early October to conduct a course with local officers on advanced techniques of motorcycle operation. After acquiring the new skills, the officers patrolling the roads will be equipped with radar guns that will determine how fast a vehicle is going.

“We will be issuing citations, we will have zero tolerance for traffic violations,” Commissioner Walwyn said at a recent town hall meeting. He indicated that persons have been contacting the police to express concern over the habits of some drivers, in particular those that drive passenger buses. “I listened to the people and I’m going to make a change in the way our motorists behave on the highway. There is no excuse for some of the driving practices that I have seen in the Federation.”

Vehicle owners were also reminded that the acceptable standard for tinted windows is 35 percent.

“Unless you have special permission, we are going to make you tear it off or we are going to cite you for it,” the Commissioner emphasized. He encouraged drivers to be attentive when driving, to obey the traffic laws and ensure that they and passengers buckle up.