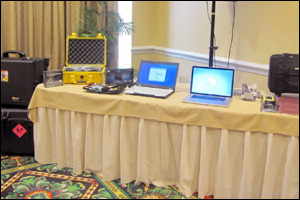 Two specialized laptops and a number of associated software and hardware components, along with other devices, were recently presented to Honourable Sam Condor, the Deputy Prime Minister and Minister of National Security by Regional Security Officer George Gaines of the Barbados-based United States Embassy.

Police Inspector Vaughn Henderson told SKNIS that the donation was timely and useful.

“We are well aware that computer-related crimes are not only a threat to local and regional countries but also to international territories,” he said, noting that it was a challenge to examine such evidence locally. As such, investigators had to utilize the cyber crime services in the neighbouring island of Antigua.

“The pieces of equipment that we received will almost level the playing field where our technological capabilities are concerned and result in more effective crime fighting,” Inspector Henderson remarked.

Local officers were also trained in the use of the new equipment by staff from the Regional Security Office. Inspector Henderson expressed appreciation to the US officials for their continued assistance in law enforcement initiatives.