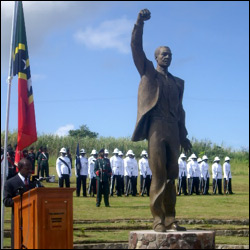 St. Kitts and Nevis Prime Minister Hon. Dr. Denzil L. Douglas has challenged the youths and citizens of the twin-island to find their niche, fill it and accomplish great things for their country.

“Today as a young nation, history offers the youth of the Federation of St. Kitts and Nevis the opportunity to achieve greatness and hero status by accident or by design,” said Prime Minister Douglas Tuesday at a Guard of Honour and Wreath Laying Ceremony in honour of the Right Excellent Sir Robert Llewellyn Bradshaw, First National Hero and Father of Independence at the RLB Memorial Community Park.

Dr. Douglas said that National Heroes Day provides an opportunity to reflect on the extraordinary things that ordinary people do which result in nation building or national development.

“It is my hope that it is an occasion that challenges all of us, especially our youth, to find the hero that lies within us,” Dr. Douglas told a large gathering of dignitaries, government officials, villagers and residents including Governor General His Excellency Dr. Sir Cuthbert Sebastian and the Ambassadors of Cuba, Venezuela and the Republic of China on Taiwan.

He said that September 19th marks the 25th anniversary of this youthful nation and at this stage, its potential for sustained growth and development is boundless. “Consequently, the nation affords limitless opportunities for heroes to emerge,” Dr. Douglas said.

“What kind of social infrastructure is needed to channel the vibrant and productive energies of youth? How can we organize the technological devices and systems to improve the quality of life for our citizens?  How can we facilitate trans-nationalism so that we feel no threat from new populations? How can we feed ourselves, clothe ourselves, and entertain ourselves and keep our distinct Kittitian and Nevisian identity? What is your passion for self and for country?   How can you influence the outcome of the next elections,” asked Dr. Douglas, adding: “What will your contribution be? Will it be a footnote in history or will you make history as descendants of the great Robert Llewellyn Bradshaw – who was a fearless, passionate and positive change agent.”

Prime Minister Douglas said none of the National Heroes was born into wealth or privilege and none knew he would receive such an honour.

“The conditions of their birth and upbringing did not predispose them to acts of greatness. They, like most other heroes are those persons who were born of humble parentage,” said Prime Minister Douglas.

Prime Minister Douglas, a cousin of Robert Bradshaw traced Bradshaw’s ascendency to heroism from his youth.

As a child Robert Bradshaw assisted his mother with labouring work on a nearby estate until she found work as a domestic servant. This did not prevent him from excelling in school. At 16 he taught as a pupil teacher for a short while before he went to Basseterre as a machine apprentice at The St. Kitts (Basseterre) Sugar Factory. It was then that he joined the Workers’ League, an organization that lobbied for better working conditions of the large disenfranchised black population in St. Kitts.

At 24, a strike for higher wages cost Bradshaw his job at the Factory and found work as a clerk with the newly formed St. Kitts-Nevis Trades and Labour Union. He also became the first secretary of the Sugar Factory Section of the Union and a member of the Executive Committee.

At 28, Bradshaw became Union President and vice-president of the Workers’ League and at 32, he led the Union through a Thirteen Week Strike. The strike sparked off a Commission of Inquiry into the organization of the sugar industry. Dissatisfied with the Commission’s conclusions, Bradshaw wrote a minority segment which was included in the report.

At 29, Bradshaw took part in the establishment of the Caribbean Congress of Labour and was elected its first assistant secretary.  At 30 Bradshaw was elected to the Legislative Council and later became a member of the Leeward Islands General Legislative Council. At 31 he represented St. Kitts-Nevis-Anguilla at the “Closer Union” Conference for the amalgamation of the Windward and Leeward Islands and at the Montego Bay Conference which discussed the Federation of the West Indies. Two years later, the 33-year-old participated in the establishment of the International Confederation of Free Trade Unions (ICFTU) in Brussels and was elected to its first Executive Committee.

Bradshaw thought it offensive that a racist South Africa would be permitted to export its products to St. Kitts and Nevis. He spearheaded a boycott of produce from the Union of South Africa.

“When he felt the court system was denying the majority justice, he initiated an arbitration committee to deal with conflict among community members here in St Paul’s, where he grew up,” said Prime Minister Douglas, who firmly stated that Bradshaw’s accomplishments before age 35 should inspire the youth of St. Kitts and Nevis.

After age 35,  Bradshaw held the positions as Minister of Government in the tripartite state of St. Kitts Nevis and Anguilla and was elected to the West Indies Federal Parliament. He led the country to Associated Statehood in 1967, was the country’s first Premier and in 1975, after getting the mandate in December 1975 from the electorate, Bradshaw initiated talks with Britain, to lead the country to independence.

“Clearly there was nothing remarkable about the status of his birth right here in this little village of St. Paul’s. I believe he hoped for a better life and pursued it. He found a cause at an early age and pursued it. It was a cause that would change the lives of many, for the better and he achieved it. It was a time when the island states were undergoing change, just like the present,” said Prime Minister Douglas.

“Today as a young nation, history offers the youth of the Federation of St. Kitts and Nevis the opportunity to achieve greatness and hero status by accident or by design,” he said.