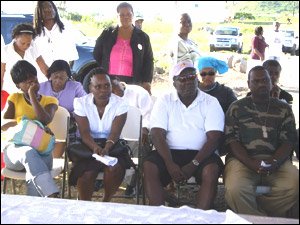 St. Kitts and Nevis Prime Minister Hon. Dr. Denzil L. Douglas has disclosed that phase two of a re”“settlement programme involves a major development plan that will see the removal of all householders on St. Kitts’ western coastline stretching from New Guinea to Old Road.

Speaking at a ground breaking ceremony on Monday for the first phase of a re”“settlement programme that will re”“settle 25 families whose homes were destroyed or permanently damaged by Hurricane Omar on October 16, Prime Minister Douglas said the residents living on the coastline from New Guinea, Half Way Tree, Middle Island, Verchild’s and Old Road will be removed to prevent the difficulties that are experienced during the passage of Hurricane Lenny in November 1999 and Hurricane Omar in October 2008.

Several of the victims who were present, joined Prime Minister Douglas and Ambassador Wu in symbolically turning the sod.Dr. Douglas, who is also Minister of National Security commended the members of the  Hurricane Omar Re”“settlement Task Force, chaired by National Emergency Management Agency (NEMA) Co”“ordinator, Mr. Carl Herbert, whom he said has been reporting directly to him twice weekly on providing assistance to the affected households.

He said the Cabinet on Monday has received a submission which specifically outlines the households which are to be re”“settled and the criteria that have been used to identify the homes that need to be re”“located.

“The Report was very strong on the point that we are re”“settling households and we want people back into their homes, not in the same condition but in a better condition than what they were in before the re”“settlement,” said Prime Minister Douglas, who earlier accepted a US$200,000 cheque from the Ambassador of the Republic of China on Taiwan.

Prime Minister Douglas praised the quick response of Resident Ambassador of the Republic of China on Taiwan to St. Kitts and Nevis, His Excellency Rong-Chuan Wu, who informed within three days of their discussion that Taipei had approved the request for financial assistance to re”“settle the victims of Hurricane Omar.

“This afternoon’s ceremony is not only ban expression that the (Labour) Government that cares can do, but also an expression of what is meant by a brother’s keeper and that is what we have seen here today, the compassion, the very firm relationship that we have established with the Republic of China on Taiwan over the years, where a friend in need becomes a friend indeed,” said Prime Minister Douglas as he thanked Ambassador Wu and the Government and People of the Republic of China on Taiwan for the generous financial contribution towards the financing of the re”“settlement of the Hurricane victims.

Dr. Douglas thanked the families for their patience and understanding as the re”“settlement programme proceeds apace.

Among those present were Parliamentary Representative, Hon. Rupert Herbert, Mr. Glenn Ghost Phillip, who quickly began recovery efforts with the help of several young men in the area and residents.

The re”“settlement programme will see the construction of 12 one, two and three”“bedroom homes in phase one. Four homes will be built at Harry Phipps in Half Way Tree and eight at Wingfield, in Old Road.

The re”“settlement programme is jointly financed by the Governments of St. Kitts and Nevis and the Republic of China on Taiwan and will see each home constructed on 4,000 square feet of land provided by the local government.

The homes will cost between EC$85,000 and EC$140,000 and allocated according to the current household.