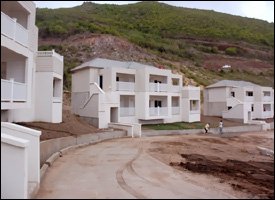 “All this is happening at a time when there is a global economic down turn there must be something tremendous about this place that can influence an investor to put over a million US dollars into a villa of this kind,” said Prime Minister Douglas at the end of a tour of the construction site on and overlooking Cable Beach in Frigate Bay.

Dr. Douglas, accompanied by Parliamentary Representative and Minister of Public Works, Utilities, Transport and Posts, Dr. the Hon. Earl Asim Martin and Minister of State with responsibility for Tourism, Sen. the Hon. Richard Skerritt, were taken on a tour of the property by Newfound Regional Director, Mr. Robert Scott.

In bringing the touring party up to date on the overall development, Mr. Scott informed that 15-two-bedroom hillside units have been completed and two 8-one bedroom beachside units should be completed as part of Phase Two by the end of October this year.

Mr. Scott said EC$40 million has been spent on the project and the next phase will incur expenditure of EC$50 million, which will include infrastructure.

“I want to thank the developers for the confidence that they have shown not only in the economy, but also in the government and the people of St. Kitts,” said Prime Minister Douglas, who pointed to the large number of Kittitians and Nevisians employed on the project.

“This is a clear indication that here are the skills that are absolutely necessary to develop St. Kitts and Nevis,” said Dr. Douglas, who highlighted the Ocean’s Edge resort development as a “partnership between the investor and the developer who have confidence in St. Kitts and Nevis, the Government and the People who can develop the kind of skills to move St. Kitts and Nevis forward.”

He said a Trinidad company is the main contractor with 12 local companies as sub contractors.

Mr. Vincent Morton, who has responsibility for quality control said of the 120 persons employed 86 are nationals. The others comprise Trinidadians, Caribbean nationals and 12 Colombians.

Dr. Douglas noted that some of the skills that are not on island are being transferred to the local workforce and expressed a measure of satisfaction that the new thrust in the education system at the Secondary School level, particular at the Saddlers Secondary School “will at a very early age to give our young people the opportunity to develop, to hone and enhance skills that are going to be necessary in building the infrastructure that we want here in St Kitts and Nevis.”