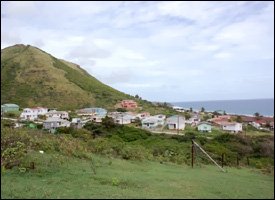 The former People’s Action Movement (PAM) totally neglected the residents of Keys Village during its 15 years in office.

Minister of Housing, Hon. Cedric Liburd said no attention was given to the small community although the Parliamentary Representative, Mr. Sidney Morris, who served from February 1980 to July 1995 was the Minister of Education, Sports and Culture and had served as Deputy Prime Minister during the latter years of the PAM Administration of Dr. Kennedy Simmonds.

“PAM while in Government never built one house for the people of Keys Village in their 15 years ““ from 1980 to 1995 when they were in office,” said Parliamentary Representative, Hon. Cedric Liburd.

Mr. Liburd noted that when he became active in politics in 1989, he indicated to Mr. Eugene Hamilton, the then Campaign Manager for the PAM Parliamentary Representative, Mr. Sidney Morris, that there were areas in Keys that could be used to provide affordable housing for the residents of Keys.

“Both Mr. Hamilton and Mr. Morris said there was no land in Keys for housing,” recalled Liburd, who after two unsuccessful bids in 1989 and 1993, defeated the incumbent Morris in 1995 General elections in which the Labour Party won seven of the eight seats on St. Kitts.

“Immediately in my very first term, I developed a new housing development at Davis Field in Keys. Twenty houses were built and more have since been constructed privately,” said Liburd.

He also highlighted a second housing development in an area on the outskirts of Keys going towards Cayon, called Keys West where XXXXX have been built.

Mr. Liburd disclosed that following a recent visit to the area with the Prime Minister Hon. Dr. Denzil l. Douglas, who has responsibility for land, a new area has been indentified for more houses to be built.

“We want to ensure that the village expands and the children move into the new houses within the community,” said Liburd.

Inadequate supply of water for residents in Keys and the surrounding areas was also a problem said Mr. Liburd who disclosed that upon taking office in 1995, it was discovered that a special water line passed through Keys from Cayon to a hotel in which the Parliamentary Representative Mr. Morris had interest in a nearby hotel.

He said the inadequate supply of water was resolved by drilling a new well in the Wash Ghut area, which now serves the Keys Community.

He disclosed that 15 young persons were currently attending college and universities overseas.

Mr. Liburd also highlighted the improved lighting and roads and the construction of a new community center and Library for the village of Keys.