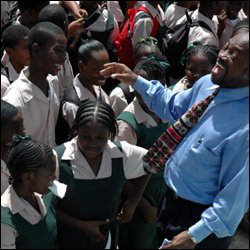 Thirty public and private educational institutions on St. Kitts will be visited on Monday and Tuesday by Ministers of Government, as part of the celebrations to mark the 25th Anniversary of Independence.

Prime Minister Douglas and his Ministers will address the students on the theme of the 25th Anniversary of Independence: “Pride, Development, Progress, Independence ““ 25 years of Success.”