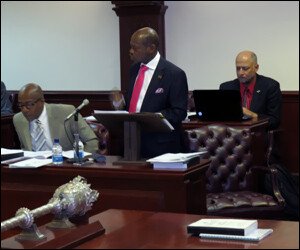 “I do not intend to steal my own thunder today.  What I will say in reference to next week’s Budget Presentation, however, is that the people of St. Kitts and Nevis, over the years, have given the Government the space it needed for its policies to work.  Those policies have worked.  We thank the people for their faith and support.  And because the people allowed the Government’s policies to work, there will be no need for any new taxes in the Government’s 2015 Budget,” Dr. Douglas, who is also Minister of Finance announced at his monthly press conference on Wednesday.

He said the policies put forward by his Government have already propelled St. Kitts and Nevis to the leading position in the Eastern Caribbean in terms of manufactured exports to the United States, economic growth, direct foreign investment, and other key metrics.

The December 9th Budget Prime Minister Douglas said “will make clear the fact that this Government is poised to implement a development plan that will builds on the unquestioned transformations that we have already produced all across the nation, and I urge the close attention of both the media and the public to this event.”

During a public meeting of his ruling St. Kitts-Nevis Labour Party in Sandy Point on Tuesday night, Prime Minister Douglas pointed out that the 2015 budget will set the framework for the continued development of St. Kitts and Nevis for the next five years.

In giving the first “glimpse of what Labour intends to do beginning with 2015 over the next five years,” the Labour Party National Political Leader is of the view that the national debt will be an issue in the coming election because of the action his administration has taken to reduce the debt.

“When we speak of where we go from here, we want to be able to tackle very seriously the challenges that we are facing national debt was one of the highest in the world, it is today from 200 percent of GDP, the national debt is just below 90 percent, maybe 87 percent is what it is right now as I speak,” Dr. Douglas said.