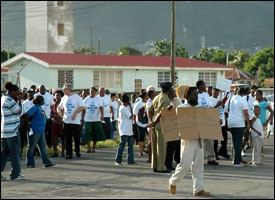 Prime Minister Hon. Dr. Denzil L. Douglas has been outlining the components of the Juvenile (Co-ed) Rehabilitation Center, now under construction at Harris’.

He said the objective of the EC$9 million Child Development Project, which is financed by a loan from the Barbados-based Caribbean Development Bank (CDB) and includes the consttuction of the center, is aimed at improving the status of children at risk by supporting programmes of early detection and remediation and the provision of rehabilitative care for those who have committed offences.

The project allows for an integrated and holistic approach to the situation of children at risk and those who have come into conflict with the law.

“Firstly it has a component of assisting parents in developing adequate and appropriate parenting skills. That was not there before. It is something new. We intend to ensure that adequate provision is made to assist parents in developing the appropriate skills to help to bring up their children in the way that they should be brought up,” Prime Minister Douglas told a Rally following a March for Hope, Peace and Unity, organised by the Methodist Church on Friday.

He disclosed to the audience which included Methodist and Catholic Ministers that a second component is to train teachers and guidance counselors.

“Even at the Primary School Level, if a child is not learning as he is expected to learn, that teacher with the appropriate training will be able to detect that something is wrong with this child. Does he have a hearing problem? Does he have a vision problem? Is he showing signs of mental retardation? Is he having an attitudinal problem? What is his reason for his bad behavior – pinching children and kicking and spitting on children? What is the reason for that? And they are trained to detect that when this happens this child needs to be targeted this child is at risk and so must be detected by the system and placed into the appropriate check and in fact training so that those behaviours and attitudes can be corrected,” said Prime Minister Douglas.

He said that a third component is to the training of several social workers to become more sensitised to the difficulties of children and also to be able especially those who would be working as Juvenile Court  Officers to develop the necessary sensitivity in dealing with delinquent children.

“The statistics have shown that when you have a delinquent child and the corrective action is not taken, that child is destined to become, in most cases, a juvenile law offender and you won’t be able to prevent that from happening,” said the Prime Minister.

He said another important component it is to develop the necessary information management system “so that we can have appropriate timely statistics of our children in this country because only with timely reliable statistics that are easily retrievable, that can help us in planning programmes of development for our children.”

Prime Minister Douglas said that another important component is the training of those who will manage and operate the center.

“They have to be professionally trained to not beating the children, not preventing them from going to work, not just simply having them there working in the vegetable gardens, but to detect what their potential. What areas of interest that they have in life and send them to the appropriate institution of learning so that, even though they are not academically brilliant,  they can still develop an interest that they have, learn a lifelong skill that they could use when they become adults and start to work,” Dr. Douglas said.

“It is not easy to tackle the problems that we are facing today and even though we will continue to demonstrate zero tolerance to crime and violence and lend the necessary support to the police to prevent, to apprehend quickly to respond appropriately to ensure that the justice system works speedily, efficiently and quickly, we still have to look at the children and what is causing the problem that we are experiencing today outside of Hope Chapel, where you go to worship on a Sunday morning,” said the Prime Minister and Minister of National Security.

Another component is to rebuild the Harris’ Home into a new Juvenile Co-ed Rehabilitation Center. Built in 1980, the main building was destroyed by fire in the mid-1980 and the residents were moved to the building used to house the Deputy Director. In 1995, it was in a serious state of disrepair and was unsuitable for housing the boys. It was rebuilt by the United States Army in 1996, only to be destroyed by fire in 1998. Ground breaking for construction of the new facility

Prime Minister Douglas commended the churches for organising the march and rally. “But I want to ask you a simple question. How many of you today, how many of you today, took a moment as you passed a young man or a young woman on the street? How many of you stopped for a moment and engaged that person?  How many of you saw a child that looked lost in space, stop and ask, what’s wrong with you? Can I help you?  It is not enough for us to only march and have this rally, we must witness to our young people as well.  We must if possible, visit them in their homes. Tell them personally about God. Make sure that the mothers who you interact with and who should be members of your church, but are not going to church, go out and look for them.  There are children who may be brought to Sunday school, how many of us are also doing that.  I say to you we are in this together. I appeal strongly to you,” he said.

He said it was time to move beyond the rally and work together as a group that is concerned about the welfare of the children and the future of the country. “Let us make sure that we can mobilise our efforts in every way to save our children,” said Dr. Douglas.