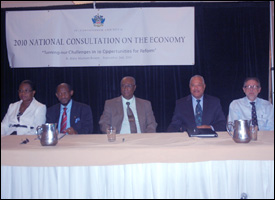 St. Kitts and Nevis Prime Minister and Minister of Finance, Hon. Dr. Denzil L. Douglas said Thursday that despite mixed economic results, he was optimistic that with careful handling and adherence to strict fiscal guidelines the twin-island Federation will be able to strengthen its fiscal position over the short to medium term.

Speaking at the 13th Annual National Consultation on the Economy, Dr. Douglas told representatives of government, social and economic partners there was a near ten percent contraction in the economic activity in 2009 which continued into the first half of 2010.

“Real GDP growth was estimated at -9.6% in 2009 and this was attributable to declines in construction, tourism, manufacturing and agriculture. The Central Government’s fiscal performance in 2009 compared with the projections showed mixed results.  While Recurrent Revenue as a whole underperformed there were some areas where favourable variances were recorded such as Taxes on Income, Stamp Duty and Telecommunications Licenses,” said Prime Minister Douglas, who also reported that other categories such as Import Duty, Island Enhancement Fund and Consumption Tax did not fare as well.

“On the Expenditure side, Recurrent Expenditure came in at EC$6.9 million below the budgeted amount with interest payment being the main contributor to savings.  The Recurrent Account Surplus of EC$9.8 million was EC$3.3 million more than the budgeted EC$6.5.  The Overall Balance recorded a surplus of EC$20 million compared with a projected surplus of EC$37 million,” said Prime Minister Douglas.

Dr. Douglas said that the government’s policy responses to the challenges currently faced will resound down through the ages as future generations are impacted by the decisions which are made at the one-day consultation.

“I therefore urge all of us to be focused, to be practical to be honest and sincere as we seek to work together to find the best solutions for our nation. It is not just the government that must take responsibility for the path which our nation takes, all stakeholders are duty bound to become involved in the nation building process and the current economic crisis makes it even more imperative that we become involved in a constructive manner now. The livelihoods of our children and succeeding generations are at stake,” said Prime Minister Douglas, pointing out that government and stakeholders have over the past five years been engaged in reshaping of the post-sugar economy.

“This has proven to be a most noble enterprise as we have seen the transformation of the various sectors in support of the new economy with its new demands.  However in the midst of this exercise crisis has arisen.  The question is how will we deal with this crisis so that it does not derail our original objective to build a vibrant and resilient service oriented economy where all of our citizens can live and work and reach their fullest potential,” said Dr. Douglas.

He said that inspite of the scope and severity of the challenges which confront stakeholders, “we must maintain our resolve to adhere to sound macroeconomic policies that would promote a stable economy, characterized by steady and sustainable growth.”

“All of the aspects of sound economic management, including sound fiscal policies which we expect will translate into manageable fiscal deficits need to be examined in order to ensure that we are on the right track.  It is for this reason that we will place on the table today many of the controversial issues which have been troubling us for some time and ask you to give us your honest and frank opinion as well as your suggestions on the way forward,” said Prime Minister Douglas, who called for a progressively enhancement of the capacity of the economy to deliver improved standards of living for nationals by ensuring that fiscal and debt situations are stabilized so that “we can provide an environment which is conducive to growth and development in both the public and private sectors.”

“Fostering a culture of excellence that would enhance the competitiveness of the goods and services which we produce is also critical.  These key elements of development are fundamental to our continued survival and progress as a nation and we simply cannot entertain any compromises.  I therefore urge that you focus your interventions on these weighty issues and on any other modernization issues which you deem critical to the reform agenda of Government,” said Prime Minister Douglas.

He expressed pleasure of the near 200 participants who saw it fit to attend and discuss the strategic reform agenda of the government.