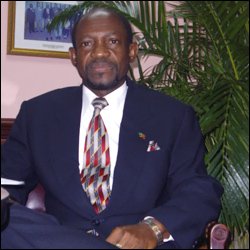 Prime Minister Douglas also fully supports the planning and organisation of National Consultations on the Accelerated Human Rights Agenda to eliminate stigma and discrimination to be held throughout the Caribbean on World AIDS Day 2012.

The St. Kitts and Nevis leader in wrapping up a meeting in his office on Wednesday afternoon with Dr. Edward Greene, the United Nations Secretary General Special Envoy for HIV/AIDS in the Caribbean and Ms. Juliette Bynoe Sutherland, Director of PANCAP’s Coordinating Unit at the CARICOM Secretariat, said “the establishment of CARPHA marks the fulfilment of the final element of the Nassau declaration 2001 which indentified the Caribbean Cooperation on Health and PANCAP as its two pillars.”

Dr. Douglas went on to say that “CARPHA’s emphasis on the public health response including NCDs and HIV means that PANCAP can concentrate on the human rights issues that involve programs to address behaviour change, enhanced access to prevention, care and treatment for at-risk populations and highlight social justice for vulnerable groups.”

Speaking on the legal aspects of human rights, Prime Minister Douglas said he was pleased to note that the PANCAP model Legislation on stigma and discrimination is being discussed by CARICOM’s Attorneys General.

“This comes at a time when we in St. Kitts and Nevis are about to complete the review of our laws aimed at reducing stigma and discrimination.  Hopefully, the National Consultation planned for World AIDS Day in the Caribbean will not only focus on legislative reform but also on implementing the laws and ensuring that there is equal access to justice for all,” said Prime Minister Douglas.