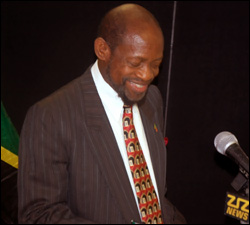 St. Kitts and Nevis Prime Minister Hon. Dr.. Denzil L. Douglas has labeled as “ridiculous” statements by a Nevisian Washington-based economist, the Leader of the Opposition, The Democrat, The People’s Action Movement and members to the press to be giving the public an impression that his Government received a $91 million check when the Italian government entity, SACE,  forgave a multi-million dollar debt incurred by the previous PAM Administration of Dr. Kennedy Simmonds.

“In all of my life, I have never heard of people having debt forgiveness and then paying you a check. It is so ridiculous. That is why I said that it really amusing that a responsible press could really waste so much of people’s good time to peddle ridiculous statements about somebody getting a $91 million check,” said Prime Minister at Wednesday’s Press Conference when ask about check by a journalist.

The rounds of the $91 million check began with Nevis-born Washington-based Economist, Dr. Everson Hull sending an email on the St Kitts-Nevis List on August 31 under the subject: HELP ME FIND THE MISSING $90,865,590 DEBT FORGIVENESS ITALIAN CHECK”

Dr. Hull stated that the World Bank and the OECD are reporting disbursements for 2008 in the amount of $90,865,590 from Italy to the People of St.Kitts and Nevis to help defray the cost of our run-away debt burden. This check does not belong to Labor. I am trying to find anybody who has seen the check, who can tell whether this check arrived in Basseterre; and whether Douggie sent any portion of the check to Parry to help him reduce his outstanding debt which has now escalated to an unconscionable 258 percent of GDP.

Dr. Hull continued: “I do not want to believe that Douggie would grab all $91 million when he knows darn well and good that 600 Four Seasons workers were displaced, with the closure of the resort drying up the dominant source of revenues to Nevis. Parry has been out there pleading his heart out issuing Treasury bills to reduce his debt and being rebuffed by investors when one of his Treasury issues was under-subscribed. Parry needs his share of this free debt forgiveness money to reduce the humongous debt that he incurred when Douggie refused to endorse a federal guarantee, forcing him out on the street to secure a loan at local retail lending rates for completing Amory’s Main Road Project.”

I believe that if Parry ever finds out that a $91 million debt forgiveness check arrived in Basseterre that was hidden from him that he would be calling for Independence for Nevis the next morning.”

The issue has been the subject of debate on the various talk shows asking about the $91 million check with little or no effort to explain to callers that no check was given to the Government by the Italian Government.

The media were referred to the Attorney General Chambers for information. A statement prepared by the Ministry of Legal Affiars was read by Prime Minister Douglas at Wednesday’s Press Conference in which Prime Minister, in which he said he was amused that “what had started as “mere political propaganda could have really consumed so much time for what is a hard working responsible press.”